It's Mish-Mash Day, and here's book number three!
I think I was approached by the author on this one...or maybe I someone got it some other way? Seriously, I've been searching and am no longer sure. But it doesn't matter because this one is free over on the author's website anyway...Nicole Adrianne.
Why? Well, my best guess is that she's about to release a brand new series. Her first trilogy, Miles & Breaker, has gotten positive praise (it's a YA SciFi Dystopian). After reading this novella, I've started reading this trilogy. Maybe I'll get a chance to share my thoughts when I'm done.
Anyway, this one is a quick, fast-paced read, which throws the reader into the virtual world and was good enough to have me pick up her other series...so, I guess that says something. 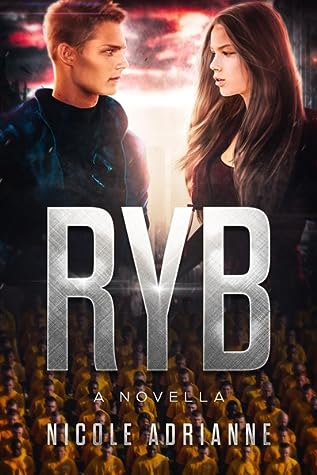 
Greta wakes up in a tunnel surrounded by soldiers, with nothing to her name but a red uniform and a sharp mind. The only thing she knows for sure: she needs to think fast if she's going to survive.

As Greta searches for a place to hide from the fighters, she notices bizarre details in her world. Are trees supposed to have secret panels? And why is the war zone next to a perfectly manicured suburb?

When Greta puts on a blue uniform and hides among the enemy, she learns they're not the monsters she expected. Their warmth and gentleness seem out of place in the battle-scarred city.

GOODREADS
FREE HERE
MY TIDBITS
Set in a 'gamer' world, this one takes a slightly different twist as it throws two sides against each other in a battle which never seems to end.
Greta wakes up in a concrete tunnel with selectively wiped memories. She has no clue how she got there, what she's doing there or even where she came from. Others around her wear blue or red, and she herself is adorned in a red outfit. When chaos breaks out and all attack each other, her panicked desire to survive and a good portion of luck bring her to the surface, where a destroyed city and outer forest awaits. But as she runs, she soon notices things are even more bizarre than she first thought. She knows where secret doors are on trees, sees flying girls, and runs into a barrier. As she tries to understand and wrap her head around what's happening, a deadly incident leaves her in the hands of the blues, and while she manages to wear blue before they notice, her life is more than on the line.
I've read a few gamer novels...they seem to be far and few between...and was excited to try this one, especially since it's a short read. It takes quite a different twist on the 'gamer' world in that, it sets two sides against each other in a seemingly never-ending, pointless battle. Or perhaps pointless. It's just the novella beginning to a series. So, there are mountains of story still in store.
It's definitely high action and edge-of-the-seat moments. I appreciate that Greta is at a loss and not super amazing at fighting or anything. She's just got a good handle on her gut feelings and sharp wits. But she makes tons and tons of mistakes...and she should considering she has no clue or shimmer what's going on. The realistic thought process does win bonus points and helped my connect with her well.
The tale itself has a lot of open ends. And there is a lack of explanation and logic holes which riddle every twist and turn. While this bothered me, at first, I have to remember that this is a short taste and dip of the toes into the pool that's about to come. The writing is solid and the characters intriguing. To say there isn't enough world building which draws in would also be unfair. It comes to life in every way. I just wish the first book was already here because I'm more than curious to see what lies in store.
on November 25, 2020