Mish-Mash Day with first Review: Lift Off by Tyrean Martinson

I'm declaring this to mish-mash day! What's that, you ask?
While I post one review a day on here, many are picture books, which leaves me (sometimes) grabbing up a random book from friends, at the library or simply stumbling across on social media...and these look so good that I need to read them immediately! Which I do but then have no space to put them up here on Bookworm for Kids. Since I have a few this time, which are for ages up to eighteen (and I had a slot suddenly open up) I've decided to make this a day where I simply shove in reads throughout the day, which I've enjoyed the last months.
And here's book #1! It's fresh off the press, a quick read, and one for YA science fiction fans. 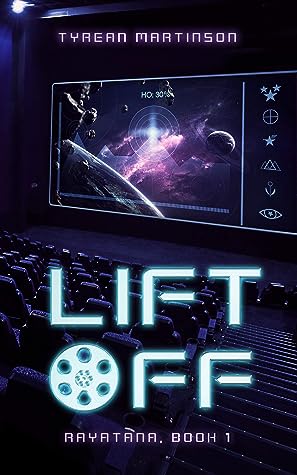 LIFT OFF
The Rayatana Series, Book One
by Tyrean Martinson
Wings of Light Publishing
Young Adult Science Fiction
105 pages
A spaceship in disguise,an Earth girl searching for a sense of home,and a Thousand Years’ War between alien races,collide on a summer afternoon.An old movie theater welcomes Amaya in and wraps her up in the smell of popcorn and licorice. But one sunny afternoon during a matinee, the movie screen goes dark. The theater rumbles.Amaya gets trapped in the middle of an ancient alien conflict. Angry and frightened, Amaya entangles herself in a life-changing cultural misunderstanding with Sol, a young alien who keeps omitting key information, even while they’re on the run from his enemies.What will it take to survive a battle between alien races involved in an ancient war?A fast-paced, clean YA read for fans of Skyward, Cobra Kai, and Guardians of the Galaxy.Science fiction, Action, Adventure, and Sweet Romance.

MY TIDBITS
Like a spaceship switching into hyper-drive, this is a fast-paced, action packed read and a good beginning to what appears to be an exciting series.
Sitting in a movie theater with her best friend to watch the latest film, the last thing Amaya expects is an earthquake to rock the theater. While her friend manages to jump through the exit in time, Amaya is held back. Soon, she finds her world thrust into the vast realm of a universal war and is unwillingly placed on the side of a young alien, who isn't being quite truthful about everything...and that while he's being hunted down.
I picked this one up because I know the author, and it's been awhile since I've set off on a space adventure. Also, the short length guaranteed I'd have enough time to shoot through this one and get it finished without stressing over my normal reading schedule. And it is an entertaining read. Definitely fast paced.
The beginning really caught my interest with a very usual scene of teens in a movie theater. The tension mounts super quick, and although I did miss a little more build-up, the adventure shot off right away and didn't slow down until the end. There are tons of surprises, a good dose of humor and snark, and run-ins which keep the characters more than on their toes. If you're looking for depth, this isn't the read to pick up because there's not much. It's a fun ride through the galaxy which centers on action, fun, frustrating moments, deadly encounters and a main character, who would probably pull her out thanks to the alien, who 'kidnapped' her, but will have to battle off killer aliens to have even the slightest chance of ever returning home. It's simply an entertaining read.
on November 25, 2020

Email ThisBlogThis!Share to TwitterShare to FacebookShare to Pinterest
Labels: Lift Off, The Rayatana Series, Tyrean Martinson