Review: Sia Martinez and the Moonlit Beginning of Everything by Raquel Vasquez Gilliland 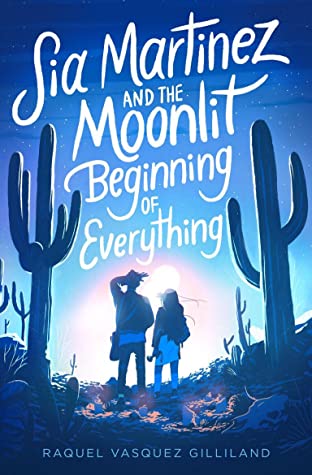 Aristotle & Dante Discover the Secrets of the Universe meets Roswell by way of Laurie Halse Anderson in this astonishing, genre-bending novel about a Mexican American teen who discovers profound connections between immigration, folklore, and alien life.
It’s been three years since ICE raids and phone calls from Mexico and an ill-fated walk across the Sonoran. Three years since Sia Martinez’s mom disappeared. Sia wants to move on, but it’s hard in her tiny Arizona town where people refer to her mom’s deportation as “an unfortunate incident.”
Sia knows that her mom must be dead, but every new moon Sia drives into the desert and lights San Anthony and la Guadalupe candles to guide her mom home.
Then one night, under a million stars, Sia’s life and the world as we know it cracks wide open. Because a blue-lit spacecraft crashes in front of Sia’s car…and it’s carrying her mom, who’s very much alive.
As Sia races to save her mom from armed-quite-possibly-alien soldiers, she uncovers secrets as profound as they are dangerous in this stunning and inventive exploration of first love, family, immigration, and our vast, limitless universe.

Packed to the gills with emotional moments, action, romance, political issues, social issues, and aliens, this book doesn't leave a breath for boredom.

Sia's mother, an illegal alien living in the US since she was 6 months old, is caught by ICE and shipped back to Mexico. Unfortunately, it's not easy for her to return, and she makes a bad decision by sneaking across the border. She disappears while crossing the desert...something Sia refuses to forgive the sheriff for, but then, he isn't a caring kind of individual. Racism runs ramped in the small town, and although Sia and her father are Americans, she still needs to keep off the sheriff's radar to keep life easy. But things are about to go weird. Strange lights appear over the desert, and soon, become more and more obvious...even to Sia. But that's just the beginning.

I love the cover and blurb on this one, and was extremely excited to get my hands on it. The characters come across naturally, and especially their dialogue is well done. I enjoyed the friendship between Sia and Rose and found it inspiring, especially since things went up and down and not always perfect. Also, the father/daughter relationship as well as the one with the other relatives was loving. It was a treat to hear about the spirits and learn about Sia love for growing heritage vegetables—such a wonderful tradition! In other words, there's a nice wholesome side to counter the more racist one, which keeps hope and goodness alive in in times of darkness.

While there is much to love, there's too much to love. Within the first half of the book, I think every difficult theme or issue mentioned in the teen-literature world was touched upon. It rolls through illegal immigration, breaking up of families, loss of a mother, racism, LGBTQ, bullying, family violence, romance, sexual assault, injury of loved ones... and I'm sure I forgot a few. Unfortunately, this allowed little time to really sink into important emotions and needed care to explore these tough issues. Many were simply brushed over in a few sentences. This was especially odd when (for example) Rose comes with horrific news and is in tears...should be crushed and comforted...but instead, one sentence later forgets the incident completely to ask and poke at a romantic possibility of Sia's. Whiplash hit leaving no time for the emotions to build which would make a reader connect with the characters' situations.

The second half of the book switches gears from emotional teen moments and issues into the alien plot. Action fans will love this half, and it was my favorite section of the book. Still, it felt like two very different reads packed into one.

All in all, it's a quick read even at over 400 pages, and it does have more than a couple inspirational moments. Sia learns quite a bit as a character, and the overall messages do offer lovely hope. I wouldn't recommend it for the older end of the YA spectrum, thanks to the writing. It simply felt younger to me. Still, this won't be for every younger reader, either, since there are several triggers. There is also foul language, some light violence and more explicit moments. For the right reader, it is a book which holds many surprises and keeps the reader guessing until the end.

Raquel Vasquez Gilliland is an Mexican American poet, novelist, and painter. She received an MFA in poetry from the University of Alaska, Anchorage. She's most inspired by fog and seeds and the lineages of all things. When not writing, Raquel tells stories to her plants and they tell her stories back. She lives in Tennessee with her beloved family and mountains. Raquel has published two books of poetry. Sia Martinez and the Moonlit Beginning of Everything is her first novel. Visit her online at raquelvasquezgilliland.com, on Twitter @poet_raquelvgil , and on Instagram @raquelvasquezgilliland_poet.

Email ThisBlogThis!Share to TwitterShare to FacebookShare to Pinterest
Labels: Raquel Vasquez Gilliland, Sia Martinez and the Moonlit Beginning of Everything