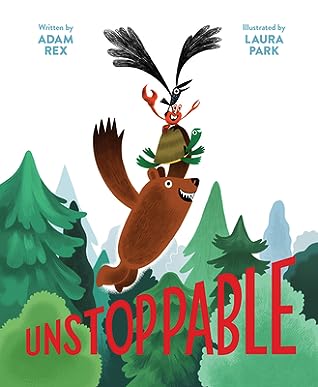 A read-aloud gem about teamwork and togetherness from New York Times bestselling author Adam Rex!If you could have any superpower, what would it be? Well, what if the answer was: ALL OF THEM! When a bird narrowly escapes the clutches of a hungry cat, a nearby crab admires the bird's ability to fly, while the bird admits a longtime yearning for claws. And, just like that, they team up. Pretty soon, the team includes every animal in the forest who's ever wanted someone else's special trait. But how will these animals stop humans from destroying the forest for a megamall? It's going to take claws, wings, and Congress together to be truly Unstoppable! Laura Park's bright, comic illustrations pair with bestselling author Adam Rex's laugh-out-loud text in this hilarious and insightful picture book about celebrating the ways you're unique, and using all your resourcefulness—and just a smidge of politics—to save the day.• Unstoppable! provides a timely lesson on the glories of diversity and the power of working together.• Perfect read-aloud book for children interested in animals, the environment, and political actionFor fans of Nothing Rhymes with Orange, Here We Are: Notes for Living on Planet Earth, The Wolf the Duck and The Mouse, and Penguin Problems.

Joining to work together flies on the wings of a more than unexpected adventure, which ends with a quirky, yet great message that leaves one wondering for days. In other words, a terrific read-aloud!

Bird hates being chased by cats and after a near-death experience, flaps into a crab, who's convinced bird's life must be wonderful. Bird immediately wishes he had claws, though. The two create an odd alliance and are as happy as can be until the next problem arises. Each time, there's a solution. Or is there?

While this book starts out somewhat logical enough, it snowballs into an adventure packed with imagination, friendship and a touch of odd twists. But it's the inspiration and advantage of working together, using each other's talents, which make this a gem. It's meaningful, it's funny, and it's oh-so fun to read. Listeners will wonder and giggle and even cheer this amazing group along. And maybe peer up in the sky, too.

The illustrations swing right along with the tale, rounding the entire thing off into a lovely read. The animals are impossible not to like and each moment is presented very clearly. It's fun to watch every page as the adventure (and silliness) expand and reach new impossible but all the more root-worthy limits.

I highly recommend this one as a read-aloud and believe young listeners won't get enough of it.

The Author...
Adam Rex is an author, illustrator, and author-illustrator known for his books including The Dirty Cowboy, School's First Day of School, and The True Meaning of Smekday, which was adapted into the DreamWorks film Home in 2014. He lives in Tucson, Arizona.


The Illustrator...
Laura Park is a cartoonist, illustrator, and enthusiastic baker from Chicago currently living in France.
on May 17, 2020