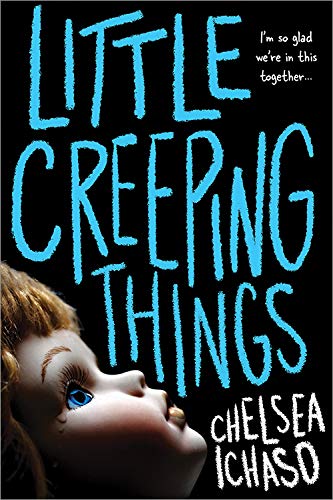 
When she was a child, Cassidy Pratt accidentally started a fire that killed her neighbor. At least, that’s what she’s been told. She can’t remember anything from that day, and her town’s bullies, particularly the cruel and beautiful Melody Davenport, have never let her live it down.
But then Melody goes missing, and Cassidy thinks she may have information. She knows she should go to the cops, but she recently joked about how much she’d like to get rid of Melody. She even planned out the perfect way to do it. And then she gets a chilling text from an unknown number: I’m so glad we’re in this together.
Now it’s up to Cassidy to figure out what really happened before the truth behind Melody’s disappearance sets the whole town ablaze.

Holding twists, which shoot out of the most overlooked shadows, this is a psycho-thriller which hooks right away and ends with an eerie treat.

Despite being an ace at volleyball if it wasn't for her soul mate, Cassidy would have been broken by the never-ending subtle bullying awaiting her every day at school. Although she accidentally started a fire, which killed her best friend, when she was a very young girl, no one has ever forgotten it. The incident still haunts her, especially since she can't clearly remember what happened. When another bullying scene has her leaving school early, her soul mate tries to comfort her in a secret spot in the woods they built as children. But while there, Cassidy hears the voice of one of her classmates...the last time anyone ever hears the girl again. Soon, Cassidy finds herself at the center of a murder, and the killer is playing a game with her.

Be ready for a well-woven plot with tons of surprises because this book packs them tight and full. The entire ride starts with a bang and lets tension and mystery sail the whole way through. Every time I thought it seemed like the identity of the killer was being revealed or a hint at what was really going on about to be dropped, the next surprise appeared, throwing everything into a doubtful spin all over again. This author knows how to lay out a thriller and keep the reader on their toes until the very last page.

Although over three-hundred-pages, I read this one within a couple hours. It flows that fast and furious. The dialogue sits, and the scenes slide through to keep the pace going. The beginning grabs and immediately throws the tension into high-gear. The ending definitely packs the most unexpected flip. It could have easily hit five stars from me, but there were some things missing due to this high speed of twists and turns.

While the first scenes grab, there were holes left to Cassidy's background. She constantly worries about what everyone thinks of her and sees herself as the Fire Girl, and while there are hints at what she did in the past, there isn't quite enough to have made me quite understand what was going on. But then, her character is always kept an arm's distance away, making it hard to really be concerned about her or feel for her. Even with her soul mate, her Giddy, she never comes across as being kind to him, but he constantly is bending to meet her. The other characters are never built out much, either, and the emotional bonds or reasons to really care are never established.

The complexity of the hidden mystery was exciting and while holding so many wonderful surprises, there were moments where logic fell a little short. For example, in the opening scene, Cassidy runs out of volleyball practice...right during the match...and leaves the high school building without a single coach or teacher noticing or even mentioned. I was also surprised to learn that she set a fire when she was a young girl and was still being bullied about it in the last years of high school as if it just happened. Even her own constant phobia about it, while making some sense, was over the top and made me wonder why she wasn't in psychological care. But on the other hand, it definitely added to the psycho end of the tale and made the creepiness in her head really set in.

In any case, this is definitely an exciting read, which had me wanting to know what the truth was until the end. So, it gets a thumbs up from me.
on May 27, 2020