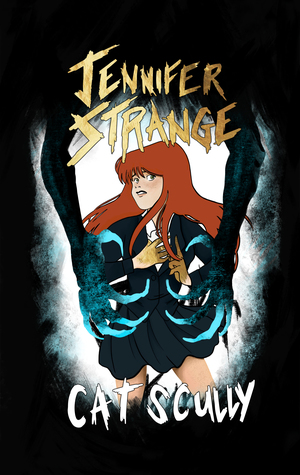 When her father disappears, Jennifer Strange moves in with her estranged sister Liz in Savannah, Georgia, one of the most haunted places in the United States. When the ghosts begin to tear Jennifer and Liz's lives apart, the sisters must learn to trust each other again if they hope to uncover the truth about their family history. If they can’t sort out their differences, they’ll not only destroy the veil between the living and the dead, but fall into the hands of a rival family that wants them dead.
Cat Scully's illustrations bring the ghosts and demons of her fictional world to eerie and beautiful life, harkening back to the style of SCARY STORIES TO TELL IN THE DARK and Ransom Riggs' MISS PEREGRINE'S HOME FOR PECULIAR CHILDREN.

After reading the blurb on this one, I couldn't wait to get my hands on a copy, and I wasn't left disappointed.

Jennifer is left in a hard spot. Literally. Her father has dumped her off at her college-aged sister's place and taken off, leaving her only with a few personal items and a notebook. But there's even more behind all of it than first appears. Jennifer has powers, strange ones that she can't control let alone understand. She only knows it has to do something with her mother and that the notebook, containing explanations and more from her parents, is all she has to figure everything out. When everything breaks loose at school and some of her classmates wind up dead, Jennifer realizes how deep in trouble she is, and that there is so much more to everything than she even suspects. If she and her sister can't figure things out and get along, they might do more than just destroy themselves. They might release demons on the entire world.

For some reason, I was expecting this to be a graphic novel. It isn't, and it's actually good that way. This is a fleshed out novel, which allows the characters to gain depth and the plot to be woven in all sorts of unexpected ways. The fact that there are wonderfully done illustrations sprinkled in between, is an extra bonus.

The tale itself was as deliciously dark and as packed with adventure as I'd hoped it be. But then, with a character like Jennifer Strange, how could it not be? She is, at first glance, a fairly normal teenage girl thrown into a difficult situation thanks to a mysterious past. Her thoughts run fairly normal and her reactions are easy to relate to. Her powers are what throw her into the category of odd...and fitting to her name, they are strange. And almost as dangerous as the demons and evil itself. There is violence, and the stakes are high. The reader is kept on the edge of their seat the entire way through. Fans of darker, young adult fantasy are sure to enjoy this one.
on May 03, 2020