Review: The Crowns of Croswald by D.E. Night 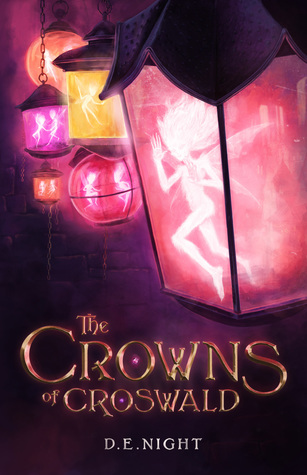 THE CROWNS OF CROSWALD
The Crowns of Croswald, Book #1
by D.E. Night
Stories Untold
Upper Middle Grade Fantasy
314 pages
ages 10 to 16
(This age group reflects my own thoughts as in some places it's advertised as a YA novel and others as a MG)

In Croswald, the only thing more powerful than dark magic is one secret...
For sixteen years Ivy Lovely has been hidden behind an enchanted boundary that separates the mundane from the magical. When Ivy crosses the border, her powers awaken. Curiosity leads her crashing through a series of adventures at the Halls of Ivy, a school where students learn to master their magical blood and the power of Croswald’s mysterious gems. When Ivy’s magic—and her life—is threatened by the Dark Queen, she scrambles to unearth her history and save Croswald before the truth is swept away forever.

Packed with fantasy, adventure and imagination, this is a tale which will make young fantasy fans' hearts beat faster.

Ivy is a kitchen maid at the castle, lives in a cupboard, and loves to sneak outside to sketch. When an accident with the dragons under the stove occurs, she's forced to run until a huge creature with a rider stops her and tells her that he's taking her to a school for those with powers. She doesn't believe she has any but is convinced to sign up. At the school, she not only learns more about magic, meets interesting students including royals, but also learns about the Dark Queen. But things aren't all wonderful. The Dark Queen is more than a threat to Ivy and her powers, she's a threat to her life.

After reading the blurb on this one and seeing the lovely cover, I was excited to get my hands on an ARC. The tale and world are quite imaginative and will have young readers hooked by all of the wonderful details and creatures—it's the stuff dreams are made of. Ivy is also a lovely character, who is easy to like and root for as she learns about her own past, meets amazing characters and faces obstacles, which will keep the reader at the edge of their seat. It's a fun start to what promises to be an exciting series.

I especially loved the details and way the author weaves in the world building with little glimpses and not word-avalanches. This along with the whimsical touches create a world perfect for middle grade readers. Even Ivy fits the middle grade roll nicely with her innocence, behavior and thought processes. And this is also where a little problem comes in. According to the story, Ivy is sixteen, but never during the read did I have this impression. She comes across as a very solid 11 to 12 year-old more than most of the time. Normally, this would throw the book into the young adult category and their are brief moments which would suggest this book should be there, but as said, the writing style, world building and most happenings are too young for many teens.

All in all, this is a very fun and imaginative read. There are more than a few obvious parallels to the Harry Potter series, but that doesn't hurt the general flow of this read. It's an enjoyable tale and great for fantasy fans.
on May 26, 2020

Email ThisBlogThis!Share to TwitterShare to FacebookShare to Pinterest
Labels: D.E. Night, The Crowns of Croswald