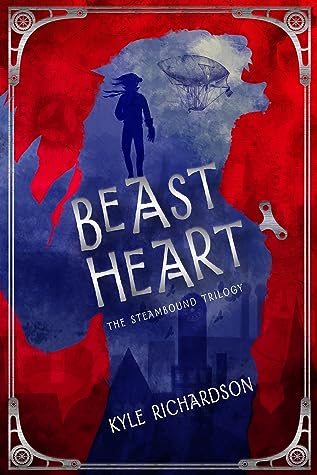 
Book 1 of the Steambound Trilogy. When Gabby’s hand turns to steam, her mom hires an engineer to build a clockwork glove. It’s the last thing Gabby wants—if only she could be normal. But when her mom is attacked by something monstrous, normal is no longer an option. Now the only person she can turn to is a grizzled detective, who promises to help her become something … more.

Meanwhile, Kemple’s foster dad treats him like a slave. And the beatings are getting worse. So when a rebellious girl named Josephyn arrives—with a plan to escape to the city—he doesn’t hesitate. But there are creatures in Iron Bay whose slashes are worse than skin-deep. And as Kemple evolves into something inhuman, his search for a cure begins. They are strangers in a city where carriages rattle, airships rumble, and their own dark pasts continue to haunt them. Soon their paths will collide, and the girl who slays monsters will come face to face with the boy who is becoming a beast.

Monsters mix with steampunk, tragedy, and hope in this adventurous read, which pulls at the heart-strings and leaves the reader at the edge of their seat until the very last page.

Gabby is special, a term she hates, and a fact she truly doesn't understand. Even at nine-years-old, she realizes that her hand turning to steam isn't something anyone knows what to think of. When her mother, the only person she has, is murdered by a vicious beast in front of her, a detective helps her swear vengence and raises her to be a dangerous huntress. But he can't prepare her for the hunt she's about to make.

Kemple is an orphan, growing up under the harshest of guardians, but when a girl joins him, she helps him escape. He does his best to live as a homeless child in the streets of a nearby city, but an accident not only separates him from his friend, but leaves him with a monster in his heart. Strange things are happening to him, and although he doesn't understand them, he knows that if he lets whatever monster inside of him free, it will kill. When he happens across a clockwork girl and her father, everything changes. While the monster inside of him doesn't break free, he begins to wonder if his new found sister might be just as bad as the beast inside of him. But when he runs into the huntress, who is determined to kill him, his life is more than flipped upside down.

This is a packed read, and one which is extremely well woven, too. I was completely taken in by the world setting and writing style—such a different feel than many of the recent reads for this age group and genre. The tale is dark and gruesome, at times. The lives of these characters is harsh and carries the aura of a dismal, steampunk urban world. And yet, there's this undying glimmer of hope, not obvious but more as a constant whisper.

While action, intrigue and tons of secrets coat every moment, it's the characters which matter most. The chapters switch between Gabby and Kemple, allowing the reader to sink into each ones' life. The two don't meet until much later in the book, allowing each story to sink in. The characters are so different and both are allowed to open up to the reader with their very different lives. Often, I find such character depth a little slow, but not in these pages. The author allows each one to get under the reader's skin, while developing a delicious weave of secrets, mysteries, and tension along the way.

Unfortunately, the book ends on a cliff-hanger. But fortunately, that means there is so much more to come. The secrets only start to unfold in these first pages, and the promise of terrifying moments, dark plots and undying hope still remain. There's even the hint at a possible romance, and that with a monster just lurking around the corner, waiting to destroy it all.