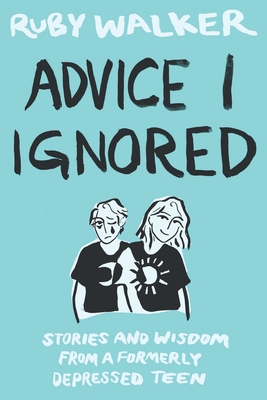 
Advice I Ignored is the only book about teenage depression that was actually written by a teenager!

When Ruby Walker was 15 going on 16, she went from a numb, silent, miserable high school dropout to a joyous loudmouth in one year flat. Advice I Ignored answers the question everyone's been asking her since: What happened?


Full of stories, honest advice, fierce hope, and over 100 hand-inked illustrations, Advice I Ignored is an important resource for teens suffering from depression (which has reached epidemic proportions), parents who have one, and educators who want to help. Applicable for adults suffering too!

Honesty and openness hit every page as the author describes her own struggles with depression as a teen and gives advice on how others might be able to pull out of the same state.

The first chapter hits with a ray of hope before the theme of depression really slides in with chapter two. I found it refreshing to start off such a book with a bit of positive encouragement. After all, anyone who picks this up and starts reading it with the hope of maybe benefiting from the advice needs to know that there is a light at the end of the tunnel. They wouldn't start reading if they weren't hoping for it. So, this already got a thumbs up from me just for that.

The rest of the book is also well done. The author goes through her own depression step by step, offering honest thoughts and experiences as she goes. The writing style is very relaxed and doesn't preach, but rather allows the author's own experiences to take center stage. These are ones that many readers will be able to relate to and easily understand the messages the author is trying to get across. There are more than a few illustrations throughout the book, which add a nice break to the more serious explanations and create an easier going read.

As to the advice itself... I always find these books difficult to judge. The author does give very solid tips and presents her thoughts clearly in a way, which readers can use in their own lives. But this book can't be seen as one which necessarily fits every depressed teen, but caretakers, guardians or anyone wanting to share this book with an individual should skim through it themselves first. For the right person, I see this as being a valuable read.

As a child, what did you want to be when you grew up?


I wanted to be an actor, but I wasn’t very good at it. I did theater growing up. I was always auditioning and then getting disappointed when I couldn’t get the roles. After I dropped out, I decided to focus on art and writing instead, because you don’t need anyone’s permission to draw or write.

When did you first realize you wanted to be a writer? Or what first inspired you to write?
I was always more interested in drawing than writing, really. But when I started my process of recovery, writing became really important to me. I think things get a lot easier to deal with once they’re down on paper. Keeping a journal helped me learn how to turn my experiences into something beautiful, or at least easier to process.

When you are struggling to write, what are some ways that help you find your creative muse again?
Sometimes I just have to be tough with myself: sit down, write something, even if it isn’t perfect. Other times, I’ve really been making an effort to write but the core concept just hasn’t come into my head yet. For times like that, I just try to go about my life in a way that makes space for thinking.  Going on a walk around the neighborhood, eating a quiet meal, taking a bath. Eventually I know I’ll think of something to say.

What’s the best writing advice you have ever received?
“If you’re bored writing it, people are probably gonna be bored reading it.”

What was your favorite book as a child?
I was absolutely obsessed with Percy Jackson and the Olympians. I used to sit up in a tree and listen to the audiobook on my little mp3 player for hours and hours. I must’ve read the whole series at least 9 times over. I had the prophecies memorized!

Ruby Walker is an 18-year-old college student, artist and writer. Ruby grew up in Austin, moved down to Buda (TX), dropped out of high school, earned herself full tuition to a private university, and is currently studying art at Trinity University in San Antonio. Advice I Ignored: Stories and Wisdom from a Formerly Depressed Teen is the only book on teenage mental health actually written by a teenager. 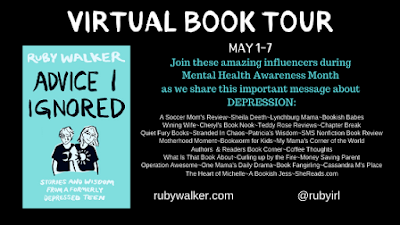