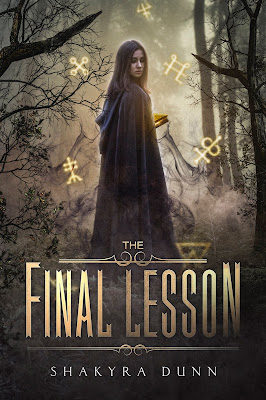 
"Trust none but yourself."Leilana Erovina's got a bid for power as she takes the final test to become one of her realm's Warlords. As such, she sets out to travel the lands of Adrylis and log magical totems from respectful folk with only one hitch—no ancestral help. The quest is a pilgrimage to learn the basics of human nature. Some would call concepts like gentleness and passion fables of the heart.In another perspective, war brews in the kingdom of Linmus, throwing Adrylis into chaos. Prince Remiel Vesarus finds himself in exile, vengeance on his mind for those who tore his life asunder. His attendant Solus Brenner at his side, they plan on restoring their kingdom against all odds.Fate has drawn these two parties together. Conjoined at the hip, the traveler, prince and right-hand will learn the old saying of magic: "It always comes with a price."

“U-Um, Leilana?” Leilana glanced up, finding the girl with lavender hair reaching the middle of her back, her bangs covering her forehead, nearly reaching her cerulean eyes. Her cheeks were coated pink, rivaling the shade of her knee-length dress. “There aren’t, um… there’s only a few of us left. Do you want to pair up?”

“Sure thing, uh…” Leilana glanced up at the sky in thought before holding up a finger in realization. “It’s Amelia, right?”

“Amiria,” she corrected sharply, her face reddening more at the affliction of her voice. Sure, the pronunciation had its similarities, but the syllables differed. And that passion of wanting her name to stick was working its wonders in Leilana’s mind. “Amiria Farone.”

“O-Oh!” Amiria held up both hands and took a step back from Leilana, trembling a bit. “It’s fine, you didn’t! I-I’m sorry if I made it seem like I was angry, I’m really not, I promise-”

“Hey now, Amiria, no need to be so scared.” Kindall wrapped an arm around the girl’s shoulders, smirking. “Lei doesn’t bite, not usually.” Amiria held her arms behind her back and turned her head to keep from looking him in the eye.

“It’s Leilana,” Leilana said abruptly. “Not Lei, not Leila, it is Leilana. Live it, learn it, love it.”

Kindall raised an eyebrow at her words as he set Amiria free and allowed her to run off towards Hinju to prepare for her own duel. “Geez, no need to be so crabby. It was just a little fun with friends.”

“We aren’t friends, Kindall.” He jumped back at the proclamation. “We’re students at the same school fighting for the same goal. That doesn’t make us friends, does it?”

“Well, I, uh… I guess not…? But don’t you think it’s better for everyone that we tried to get along and be friends? You’re right, we’re all fighting for the same goal. Some of us are going to be Warlords someday, and we can all support each other until we get there. Right?” Leilana pondered his words before she cleared her throat.

“…I’m sorry. I’ve got a match.” She stepped past him, and Kindall stared at her back a moment longer before sighing, reclaiming his spot on one of the logs.

“You really are just a kid after all,” Kindall mumbled.

Leilana stood opposite Amiria, revealing her grimoire for her opponent to view. Amiria clutched the silver flute in her hands for dear life but kept her attention on the girl and even managed to narrow her eyes to try and stir up some intimidation.

“Come to think of it,” Lancett whispered to Kindall, “I’ve never seen Amiria fight before. She doesn’t seem like she’d hurt a fly.”

“No, she doesn’t,” Kindall replied, retaining focus on the two. “But Amiria has skills that a lot of people don’t understand.”

“Begin!”
Leilana rapidly flipped through the pages of her grimoire and an array of fireballs shot out at the girl. Amiria put the flute up to her lips and closed her eyes, playing out a small melody on the instrument before reflecting the magic back in Leilana’s direction. Leilana side-stepped out of the way, her eyes darting between the singed grass and Amiria herself, who was starting up another melody on her flute. She scoffed before flipping through the grimoire, stopping on a page, mumbling a scripture.

From the book, a pair of teeming hands cloaked in shadows emerged, grabbing the flute from Amiria’s grasp and snapping it in half before her very eyes. Amiria blinked away the tears starting up as she stared at her destroyed instrument, collecting the fractured pieces. With each passing second, her eyes grew dark and clouded. Leilana outstretched her right palm, sending the hands propelling towards her. Before they could reach her, Amiria inhaled deeply and closed her eyes, belting out a single high note in a pitch of middle C.

The single note, prolonged over several seconds, caused the hands to shatter away. Leilana froze as the note progressed, the ground around her beginning to tremble before giving way under her. She let out a shriek as the chasm opened, reaching out a hand as she fell. Amiria gasped when she realized what was occurring, covering her mouth with both hands.

“Leilana!” Lancett raced forward, sliding on his side as he ran, grabbing her by the arm. Several other students rushed to his aide, helping the girl out of the chasm. Leilana laid a hand on her chest, finding it difficult to regain herself, her frame quivering from shock. Lancett gently placed both hands on her shoulders, forcing her to face him. “Are you all right?”

He bowed his head, hands still on her shoulders, sighing heavily. “Good. I’m glad.” Hinju was still in a bit of shock himself, his gaze reflected on Amiria now, who continued to put the pieces together in her mind about what she had done. After coming to his senses, he held up his staff, moving stalagmites of the earth back into place to mend the open crater, sealing it shut.

“Hey, don’t beat yourself up over it,” she interjected, “Don’t worry. I’m fine. I promise.” Leilana heaved a sigh. “Okay, maybe not completely true, I’m a little bummed that I lost so terribly, and so fast. After all that work I put into learning the concepts of the Lasette…”

“Remember what Master said,” Lancett told her, smirking. “It’s all a learning experience. You can definitely do better next time.” She averted her gaze from him.

Shakyra Dunn can't stray away from the impression that there is always an adventure around every corner! When she isn’t playing the role of the Creator, she is marching through the worlds of her favorite video game characters or taking drives around her city to see the sights. Born in Chicago, Illinois, she currently resides in Cedar Rapids, Iowa, striving to experience more than the little town. 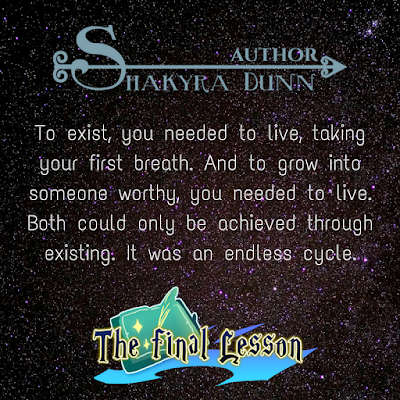 Email ThisBlogThis!Share to TwitterShare to FacebookShare to Pinterest
Labels: Shakyra Dunn, The Final Lesson, YA Fantasy