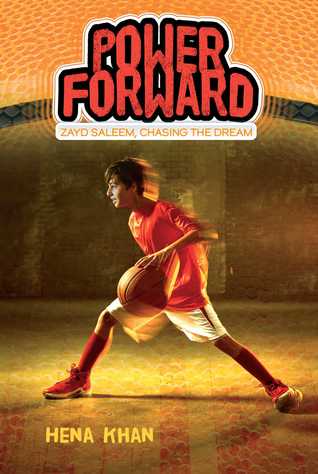 From the critically acclaimed author of Amina’s Voice comes the first book in an exciting new middle grade series about a fourth-grader with big dreams of basketball stardom.
Fourth grader Zayd Saleem has some serious hoop dreams. He’s not just going to be a professional basketball player. He’s going to be a star. A legend. The first Pakistani-American kid to make it to the NBA. He knows this deep in his soul. It’s his destiny. There are only a few small things in his way.
For starters, Zayd’s only on the D-team. (D stands for developmental, but to Zayd it’s always felt like a bad grade or something.) Not to mention, he’s a bit on the scrawny side, even for the fourth grade team. But his best friend Adam is on the Gold Team, and it’s Zayd’s dream for the two of them to play together.
His mom and dad don’t get it. They want him to practice his violin way more than his jump shot. When he gets caught blowing off his violin lessons to practice, Zayd’s parents lay down the ultimate punishment: he has to hang up his high tops and isn’t allowed to play basketball anymore.
As tryouts for the Gold Team approach, Zayd has to find the courage to stand up for himself and chase his dream.

Of all the sport fiction for middle graders I've read so far this year, this one makes the slam dunk. SIZZLE.

Zayd is a fourth-grader who dreams of becoming famous, preferrably as an NBA basketball player. But right now, he's on the D-league, which means he's going to have to move up to the gold team first. He's determined and actually has the chance to shine at the next tryouts, but his parents and their dream of him playing the violin is getting in the way. Somehow, Zayd's going to have to work things out if he wants a prayer of achieving his goals.

The author does a fantastic job at bringing Zayd and his problems across naturally, and has a real talent for getting into kids' heads. Zayd is a good boy with a big dream, and he is willing to put in the work and time to make it. His attitude and occasional slip-up are completely understandable and human. He's a lot of fun, has heart and is a joy to cheer for the whole way through.

The writing flows smoothly and at the right level for the intended audience, making this an easy read. It's not too long and the occasional illustrations make it perfect for even more reluctant readers, who'd rather hit the court than hold their nose in a book. Considering it's the beginning of a series, it will be fun to see where each book takes Zayd on his journey toward basketball dreams.

There's a wonderful balance between the basketball scenes and Zayd's everyday life. When he touches that ball, the scenes hit as a real practice. The movements, thoughts and terms are true to life and allow the reader to sink in and feel at home in the game. But this is also true of Zayd's family life. His family has Pakistani origins, which is never forced but flows with the story while keeping the cultural uniqueness in an American setting. Zayd's grandparents still carry their slight accent and influences from the culture sit in his everyday life. It's a great balance and very natural.

Fans of basketball or sports will love following Zayd as he battles to achieve his dreams not only on the court but also takes on everyday life.

Hena Khan is the author of several books including Amina's Voice;Power Forward; On Point; Bounce Back; It's Ramadan, Curious George; Golden Dames and Silver Lanterns; and The Night of the Moon. Hena lives in her hometown of Rockville, Maryland, with her husband and two sons. You can learn more about Hena by visiting her website at HenaKhan.com.
on June 09, 2018