Review: The Memory of Forgotten Things by Kat Zhang 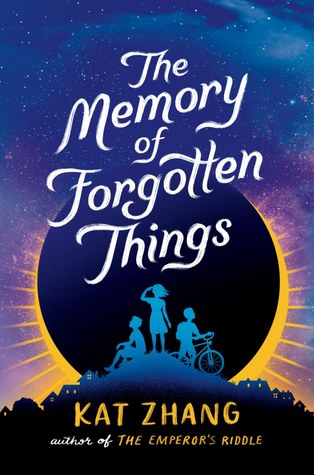 One of the happiest memories twelve-year-old Sophia Wallace has is of her tenth birthday. Her mother made her a cake that year—and not a cake from a box-mix, but from scratch. She remembers the way the frosting tasted, the way the pink sugar roses dissolved on her tongue.

This memory, and a scant few others like it, is all Sophia has of her mother, so she keeps them close. She keeps them secret, too. Because as paltry as these memories are, she shouldn’t have them at all.

The truth is, Sophia Wallace’s mother died when she was six years old. But that isn’t how she remembers it. Not always.

Sophia has never told anyone about her unusual memories—snapshots of a past that never happened. But everything changes when Sophia gets assigned a school research project on solar eclipses. She becomes convinced that the upcoming solar eclipse will grant her the opportunity to make her alternate life come true, to enter a world where her mother never died.

With the help of two misfit boys, she must figure out a way to bring her mother back to her—before the opportunity is lost forever.

With a touch of magic and tons of heart, this is a book which grabs, makes the reader dream and doesn't let go.

Sophia is in the seventh grade. Her mother died when she was six, but memory flashes allow her to see events with her mother up until she was much older than that. These flashes are too familiar and vivid to be dreams, yet they can't be reality. At least, not the one she knows. When an eclipse nears, she begins to suspect her memories are more than just dreams. Maybe there's even the chance she can have a life with a mother who didn't die.

The author does a wonderful job at touching upon some difficult themes and bringing them home for the intended audience, while still incorporating a dust of magic/science fiction and hope. Sophia lost her mother and still deals with the effects years after it happened. But this story isn't only about Sophia. She becomes friends with DJ and Luke, both who have suffered losses of their own. The kids come across mature, sometimes very mature, but usually natural. They see life from a twelve-year-old's view and deal with familiar issues and thoughts. This allows the light science fiction elements to flow in seamlessly and make it a great read for both girls and boys ages nine to twelve.

After reading the blurb, I assumed this would hit the magical realism arena, but the author does go a step farther and allows questions concerning dimensions and time to open up. It has a surprise ending, but one very fitting for the tale. This is the kind of book which grabs the heart, keeps a quick enough pace never to grow boring and allows the reader to think and consider possibilities which they might not have considered before.

Kat Zhang spent most of her childhood tramping through a world weaved from her favorite stories and games. When she and her best friend weren't riding magic horses or talking to trees, they were writing adaptations of plays for their stuffed animals (what would The Wizard of Oz have been like if the Cowardly Lion were replaced by a Loquacious Lamb?). This may or may not explain many of Kat's quirks today. (taken from Goodreads.)