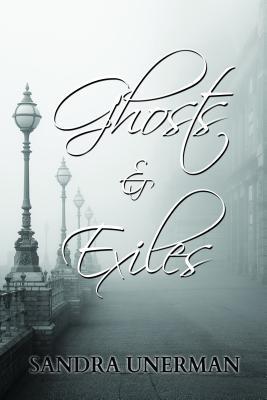 Tilda Gray hates Spellhaven, the city where her husband was born, even though she has never set foot in the place, and she does not believe in the magic it's supposed to have held. Now her husband is dead, she would rather avoid any mention of the city. But her sons, Nicholas and James, have befriended Hugo, a young boy threatened by forces none of them understand. When Hugo's uncle and guardian, Stephen Cole, visits the Gray family to ask for help, Tilda agrees against her better judgement. Between them, as they search for ways to banish or at least help Hugo cope with the ghosts that are driving him mad, they seek out the dubious aid of the exiles from Spellhaven. In doing so they must face new dangers and unknown magic, unlike anything Tilda could have ever believed possible.

I did read the first book in the series, Spellhaven, and although Ghosts and Exiles weaves around mostly new characters, it would be advisable to start at the beginning of the series to understand the background information.

Hugo is a boy, who has an odd problem. He sees and hears ghosts. Lots of them. When his uncle approaches the mother of his best friends to try to figure out what is going on with Hugo, the mother, Tilda, wants nothing to do with. Her deceased husband was from Spellhaven, something she wants nothing to know about. But when one of her own sons claims to sense ghosts, and her other one is kidnapped and place inside a glass ball, she can no longer ignore everything her husband tried to tell her.

This is a lovely following story to Spellhaven. While the first book takes place on a magical island, this one digs its feet into a very normal, past London. The author does a fantastic job of building into the magic slowly, allowing the real world to stand fairly firm while the fantastical elements mount.

Tilda stands at the center of the mystery as she tries to figure out what is happening with her son and the identity behind a man, who is determined to capture the boy. She's uptight at first and sharp on the edges, but as the story unfolds, she softens. Still, this isn't only a story about her. The point of view switches between several characters, allowing even the boys a large time in the spotlight. In many ways, this isn't only a tale for adults but also leans toward the upper middle grade level, at times. The boys are a handful and lots of fun, although the tension around them is constantly high thanks to the evil man they have to deal with. It was a joy to follow them.

While magic and fantasy build, the world also holds a nice, historical feel, and it makes for a lovely mix. When the spirits appear, it doesn't come across as odd. But much of that has to also do with Tilda's own reactions. She takes everything pretty much in stride, although she fights against disbelief too. The story and the fantastical aspects mount along with the tension, insuring that there's never a boring moment. There are still some stumbles in the magical logic, but nothing serious. And the reactions of the exiles are not sometimes hard to understand, but it's still an engaging read which holds until the last page.

In many ways, I enjoyed this book more than even the first and can highly recommend it to magic fans who love a historical setting.