Review: Freya And The Magic Jewel by Joan Holub and Suzanne Williams 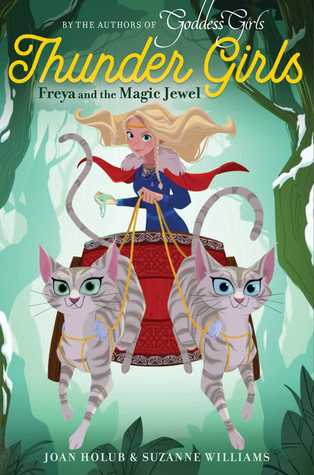 From the authors of the Goddess Girls series comes the first book in a brand-new series steeped in Norse mythology, magic, adventure, and friendship.

“Gold and Gullveig I cannot see. But here is a vision that comes to me; Adventure for you is about to start. Near Asgard you must find the heart. A Secret world there hides away, which holds the power to stop doomsday!”

When eleven-year-old Freya hears that prophecy from her magical jewel, she isn’t sure what to make of it. Doomsday? She will find the key? Mere seconds after that prediction, she receives a mysterious invitation to Asgaard Academy from the powerful Odin, who commands her to “bring her magic” to Asgard.

With encouragement from her twin, Frey, Freya reluctantly heads out on their new adventure. And Freya’s first challenge begins before she even steps foot in Asgard. While trying to navigate the treacherous BiFrost Bridge, she drops her magical jewel off the bridge, and a sneaky pair of dwarves take her jewel down to the world of Midgard!

Without that jewel, Freya thinks she is powerless. But with the help of her pod-mates at Asgaard, Freya discovers a world that is bigger and more mysterious that she ever imagined! There, she learns the true terror that Ragnarok—the doomsday her jewel warned her about—could mean for Asgard Academy if she and her new friends, the Thunder Girls, don’t stop it!

I've read several books by Joan Holub and wasn't disappointed by this one either. With girl fun and gentle but exciting adventures, she and Suzanne Williams bring Norse mythology a little closer to young readers.

Freya isn't sure what's wrong with her magical stone. It claims that she will move to Asgard (an enemy her people just made peace with) and thwart Doomsday. Obviously, she's not moving to Asgard—she has her own things to do, not to mention school. But when she arrives, her twin brother tells her Odin has basically ordered her and her brother to attend a new school in Asgard. Freya isn't sure what to think; especially Frost Giants aren't the kind she wants to rub shoulders with. But soon she discovers that those giants are the least of her worries.

Although this book is based on Norse mythology, it takes a very original and loose spin on the ancient tales. Freya does have problems to solve and things to work out, but each and every adventure is also packed with humor and fun. The result is a gentle adventure which holds tension, excitement, tons of friendship, and giggles too.

Freya is a self-assured girl, who thanks to being the goddess of love, has a flock of admirers (and tons of fan mail). Still, she hasn't let it go to her head. She's kind, develops friendships easily and has a good handle on the feelings of those around her. In other words, she's easy to like and never comes across as someone who is overly special, although others try to put her on that pedestal in this tale (at least, Odin does).

This is an easy read. At over 250 pages, it might make younger middle grade readers swallow, but the pages flow quickly. The vocabulary and subject is especially appropriate for the younger side of the intended age group (ages 9 to 12). Even the plot will thrill yet never push the borders for more sensitive readers. Friendship is always key in this story and warms like a huge hug. Even when small irritations arise between the characters, these are handled with calm finesse and lots of care.

Fans of girl power, gentle adventures, friendship and Norse mythology are sure to enjoy this one. It's a great beginning of what promises to be a fun series.

Joan Holub has authored and/or illustrated over 140 children's books, including the Goddess Girls series, the Heroes in Training series, the New York Times bestselling picture book Mighty Dads (illustrated by James Dean), and Little Red Writing (illutrated by Melissa Sweet). She lives in North Carolina and is online at Joan Holub.com.

Suzanne Williams is the author of over fifty books for children, including the Goddess Girls series, the Heroes in Training series, and the award-winning picture book Library Lil (illustrated by Steven Kellogg). She lives outside Seattle, Washington, and is online at Suzanne-Williams.com.