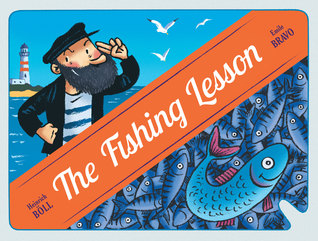 
A hilarious read with an important message
A humble fisherman is taking a nap in his boat when a tourist interrupts him. The outspoken tourist points out that instead of napping, the fisherman could go out and catch more fish, which would eventually earn him enough money to buy a proper motor-boat. The tourist continues to embellish his idea, envisioning canneries, restaurants, and private helicopters. But the fisher­man has his own ideas about what success looks like.
With comic-like illustrations that emphasize the story’s humor, this funny and thoughtful book will inspire readers to celebrate life’s simple pleasures and enjoy the here and now.

This is a well known tale from a famous German author during the 1960's (I believe), and it has exactly the sense of humor which fits to this.

A sailor is minding his own business, taking a nap under the sun in his small fishing boat. A tourist sees him, and after taking some pictures, begins to question the sailor's decision to lay around instead of fulfilling his job and fishing. The tourist's ideas blossom and bloom to the full extent until a funny and surprising end is reached.

The book is done in a bright and colorful comic book/graphic novel form. The illustrations fit the story perfectly and glide with the words, making it clear what is happening as well as bringing across the tourist's excitement on every page. The translation is well done and kept in a language easily understandable for even younger audiences. Still, this isn't a picture book for younger kids. Rather, the message is better understood by readers nine and up, and probably most effective on even older audiences like adults. It is humorous but more in a dry, intelligent direction. . .as is common with the German humor.  It's definitely an interesting story which makes a reader think, although it might not be for everyone.

I won a complimentary copy through Library Thing and enjoyed it enough to want to leave my honest thoughts.