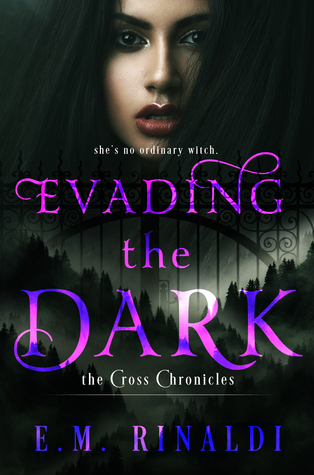 
High school sucks. It doesn’t matter who you ask; jock, cheerleader, computer nerd, or band geek, they will all say the same thing: It’s a nightmare. But Casey is still wondering how she got the short end of the stick. Just a Sophomore at the prestigious Luthos Academy for Magical Beings, Casey already knows more about heartache and fear than any almost-sixteen-year-old should. Orphaned and left to be raised by the Academy, she spends her days training to become a Guardian, but that dream is looking dimmer with every day that passes.Unlike the wand-waving heroines in all her favorite books, Witches in her world don’t cast spells, they are born wielding the power of nature: water, fire, earth, or air; powers Casey never developed. She’ll be lucky if they even allow her to take her final exams.

She is top of her training class, but that doesn’t keep her from being looked down upon by every other being at her school. All Casey wants is to be given a chance, instead she finds the only life she’s ever known targeted by an unfathomable evil. Thrust into the center of an age-old prophecy, a war is coming with Casey at the reins.

Will relying on her hard earned training be enough for her to make it out alive?

After reading the blurb, I grabbed this one up and hoped it wouldn't be too cliche so that I could love it. And that's exactly what happened.

Casey sits at the bottom of the social list at her school thanks to her being of mage blood but without a drop of magic in her. She's broken, and there's especially one boy who's determined to make it painfully clear how terribly she fits in. Luckily, she has one ever loyal friend. However, her world isn't safe. There are attacks on the school, and one ends Casey in a strange predicament which draws the creepy and unwanted attention of a dangerous man. Soon, Casey finds herself involved in an evil plot which threatens to shake the magical world.

The author, at first, paints a high school as familiar and normal as can be allowing the magical aspect to sneak in after the first impressions are built. This was wonderful in so far that the characters and their lives took center stage before the fantasy elements dropped in.

Casey is a girl with lots of baggage, but she's not weak. Her desire to be accepted is understandable but never pitiful. The way the other kids treat her is to the extreme (and slightly unbelievable) but for the story, it holds well. It's easy to feel for her, wish things will change for her, and fever for her when the real trouble sets in.

While the first chapters ease into the story, the rest of the plot is fast paced with many unexpected twists and turns. The mystery mounts as the dark yet unknown threat hangs outside the school walls. The uncertainty to what it means or its importance adds just the right amount of darkness before the true problem sets in. The 'real' evil is easy to hate, and the author does a great job at keeping the reader guessing at the true reasoning behind the threat. While the danger was extreme, the reasoning behind the evil actions did have some holes toward the end. Still, it flows well enough to make the reader hang on to see what will happen with Casey and her friends.

The ending is a cliff-hanger and many questions remain open. Still, I'll be looking forward to see where Casey's adventures take her to next.
on June 29, 2018

Email ThisBlogThis!Share to TwitterShare to FacebookShare to Pinterest
Labels: E.M. Rinaldi, Evading the Dark, The Cross Chronicles, YA Fantasy, YA Paranormal