Review: A Girl Named Blue by Cecilia Randell with Giveaway! 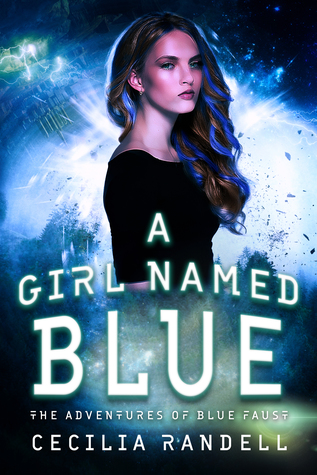 
Blue Faust considers herself an ordinary girl. A little shy, maybe, and a smidge isolated. But she’s got a plan for that, and a list.
When she and her mother move to a new city, she implements it. This will be The Year of New Things, and there will be adventures. Little does she know just how right she is.
While out hiking one day with new friends, she finds herself in a strange world. She is confronted with kidnappers, stubborn beast-mounts and killer crystals. Throw in an assortment of hooligans, mercenaries and clansmen, and Blue has all New she can handle.
New List:
Learn to ride a horse-like thing
Find friends
Stop kidnappers
Get home
Easy, right?
*** Please note that this is the first book in a slow burn reverse harem series, there are no sexy times till a few books down***
**Also, there is violence and some swearing, so, yeah.**

This is a book with stumbles, oddities, a parade of beginning glimpses into certain characters, and yet, it grabbed me to the point where I couldn't put it down.

Blue Faust is still battling with the loss of her father and trying to find footing along with her mother to jump start their lives again. After a move, she's about to enter a new school and has a list of ways to go beyond her boundaries and attack life head-on—a way to honor her father's memory. When a hiking trip with her new found friends lands them on a different world, they find themselves caught up in the middle of a huge, 'alien' conspiracy. Blue's idea of finding new adventures in life now takes a spin which isn't only beyond her wildest dreams but is simply dangerous.

Blue is a strange girl and was hard to connect to at first. She supposedly has switched schools many times in her life. . .so should be a fairly normal teen but with issues. Instead, she comes across as extremely naive, socially challenged (at best), and almost as if she as no idea how life in high school normally functions. Still, there's something about her which was intriguing, and as the story continues, she grows and matures. Not completely but enough to make it hard not to cheer for her.

This is a reverse harem romance and a very slow burner at that (something I appreciate). From the guys' side, it's love at first sight. Always. Instantly. Without question. Which made me wonder if there is/will be some sort of alien power about her later on. . .or maybe not. In any case, despite her lack of any special traits (except blue hair and being relatively small), guys can't resist her. That is something some readers will be okay with and others not. However, from Blue's side, there is little to no interest during this first book. Another thing I appreciated. She has her hands full, completely. She's dealing with her father's death, finally connecting to her mother, figuring out where her life should go, caught up in an alien world, thrown into deadly dangers. . .yep, she has enough on her plate without heading into romantic tug-a-wars too.

While the first chapters hit teenage drama in a high school setting, the exciting, sci-fi action starts a little later on. And it works. The author takes the time to let Blue and the 'normal' earthlings gain a sure footing before fantasy sets in. And when the other worlds unfold, it's no problem to sink right into them. The settings are well described and the logic founded enough to make it pretty easy to follow along. As the layers of conspiracy and intrigue later start to unravel, it does get more complicated, and there are enough levels left to hit off to the rest of the series. One that promises to be interesting, especially when taking into account the extreme corners Blue's future harem of men seem to be coming from. It will be interesting to see how all of this somehow pulls together. Cecilia Randell is the pseudonym for a lady author that has not quite worked up the courage to give you all her real name. She loves a good story, and often finds herself thinking “what if…”, so decided to put some of her ‘what ifs’ down in words for others to, hopefully, enjoy.

Email ThisBlogThis!Share to TwitterShare to FacebookShare to Pinterest
Labels: A Girl Named Blue: The Adventure Begins, Cecilia Randell, Giveaway, NA Romance, The Adventures of Blue Faust, YA Adventure, YA Sci-Fi, YA Science Fiction