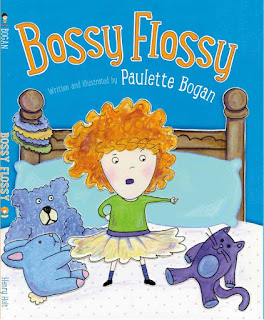 This book takes a girl's very bad habit, makes it hit home and manages to leave the reader both thoughtful and bearing a smile.

Flossy is bossy. Very, very much so. She tells everyone what to do and doesn't let anyone come at her with a word otherwise. Until an amazing thing happens, and she finds herself on the taking end of this horrible trait. But Flossy isn't about to let anyone get the better of her.

The moment the first page hits, it's clear--this book isn't only a treat for young listeners to hear, but for the older readers as well. Commands shoot out in speech bubbles, making every word come to life. Flossy's voice is so realistic that it echoes inside the head and lures to imitate. There isn't much text, just enough to make the situations clear and bring Flossy and friends to life. The vocabulary is spot on and the word choice true to life. In other words, it's perfect for kids even three and up.

The pictures are simply sweet. They aren't overly perfect (a super plus), are colorful and offer enough details to draw readers and listeners in time and time again. They offer a diversity of characters and actions, and are easy to set in scene

Of course, there's a clear message, and it's not hard to guess what it is. Still, it doesn't feel predictable but rather follows along so close to a possible reality that one can't help but smile. Because each of us has met a Flossy just like this...and maybe harbor one inside of us ourselves.

Summed up, this book does a fantastic job bringing a horribly irritating habit to life and leading the problem to a solution without ever feeling preachy. It's fun to read, fun to listen to and something kids ages 3+ are sure to like. 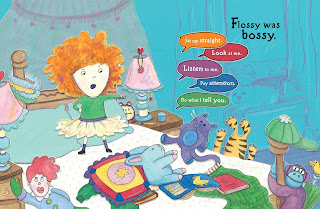 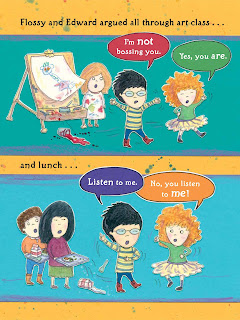 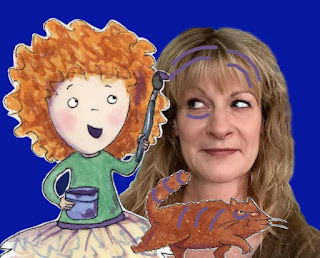 Paulette Bogan admits she was bossy as a child. She is the author and illustrator ofVirgil & Owen, which was chosen as one of Bank Street Best Children's books of the Year 2016, Virgil & Owen Stick Together, which won a Mom's Choice Award Gold Medal for Picture Books, and Lulu The Big Little Chick, which won a Children's Choice Book Award. She lives in New York City with her husband, three daughters, and two dogs. They ALL think she is STILL bossy. But they've never told her to go to her room!
Connect with the author: Website  ~  Twitter  ~  Facebook