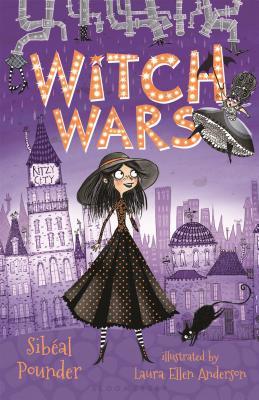 When Fran the Fabulous Fairy turns up in Tiga Whicabim's shed to tell her she's a witch, Tiga doesn't believe her. Or at least not until Fran points out that TIGA WHICABIM is actually an anagram of I AM A BIG WITCH . . . and takes Tiga through the drainpipes to compete in a challenge to crown the next Top Witch of Ritzy City. No one expects a witch from 'above the pipes' to be a serious contender, but soon Tiga and her new best friend, Peggy Pigwiggle, are at the head of the pack! Does one of them have what it takes to win?There will be spells. There will be shrunken heads. But most of all, there will be serious shoe envy. Perfect for fans of Sarah Mlynowski's Whatever After series and filled with hilarious black-and-white illustrations, delectable dresses, and ridiculous riddles, Witch Wars is whimsical, magical fun!


Ready to travel through the drain pipes? Be careful, though, it might cause warts! This is a story packed full of fantasy and fun, taking the reader to a world which could only materialize with a ton of imagination.

The first sentences already set the tone--a small fairy trudging through a yard while holding a leaf over her head. And Tiga, the girl this fairy is about to visit, eats nothing but boiled cheese water and has no idea how to escape the 'evil' woman taking care of her. This is a story where it's never clear what will pop up next, but whatever it is, it's sure to entail tons of whimsical and nonsensical ideas. In other words, kids will eat it up.

Tiga is the kind of girl who gains sympathy the moment she hits the first page. Not only do her sad circumstances play at the heart strings, but she's kind-hearted and clever. When she lands in the witch world of Ritzy City, her reactions seem not only bold but reasonable. . .well, as reasonable as anyone could be in such a situation. Later in the book, her reactions aren't always as convincing, but in general she's a fun character to follow. She's the kind of girl most readers would love to be friends with.

There's a nice message of friendship, perseverance, and loyalty in these pages, which rounds off the adventure with a sense of warmth and well-being. Everyone is different in this story, but each character has it's place. It's easy to dislike the bad ones, enjoy the nice ones and laugh with the silly ones.

The plot is relatively fast paced, jumping from one situation into the next. There are several riddles which the characters need to solve, Although these are well written and thought out, I found they were quite as involving to solve as they might have been and could have pulled the reader in more. But each new clue leads to more exciting places and enjoyable scenes. There isn't a dull moment.

The only thing which bothered me about this book was the length. The writing and story are geared toward the younger side of the middle grade audience (ages 8 - 10), but at around 270 pages, I found it a bit of a challenge for the average reader at this level. But, on the other hand, there was a lot going on. So much so that several times scenes seemed to leap too fast or things happened too suddenly as if rushing to get to the next point. This left me feeling as if I'd missed something and was a bit confused at times as to how moments suddenly popped up.

Summed up, this is a lovely read packed full of fun--the nonsensical kind which lets children imaginations soar. I recommend it for kids 8 to 10, and especially believe girls will enjoy Tiga's silly adventures and root her on.