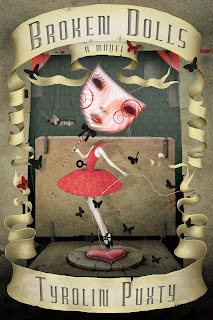 She helps the professor create other dolls, but they don’t seem to hang around for long. His most recent creation is Lisa, a sly goth. Ella doesn’t like Lisa. How could she, when Lisa keeps trying to destroy her?

With time running out and mad dolls on the rampage, Ella questions her very existence as she unearths the secrets buried in her past; secrets that will decide whether Gabby will befall the same fate…


I was lucky enough to receive an ARC of this a couple of weeks before Halloween, so needless to say, I was in the mood for something a little creepy.
Broken dolls has just the right amount of dark to make a person shift uneasily in the chair, glance up at unexpected bumps and feel a slight chill. But at the same time, there's a slight ray of hope and sweetness. It's a delicious mixture, which fits well in the line of Coraline, Adams Family, Beetlejuice and so on.
Ella is a doll, and we quickly learn that she was once a real girl, who due to mysterious and horrid circumstances (which neither we nor Ella are aware of) has been turned into a doll by the 'Professor'. She's mostly satisfied with her situation, which already adds a sad tinge to the story. She's naive in so many ways that it's hard not to want to race to her side and help save her. . .whatever that might mean.
The story quickly picks up pace as the Professor introduces a friend, Lisa. Unlike Ella, Lisa does remember her past and is not glad that the professor 'saved' her by turning her into a doll. Lisa takes this knowledge as a reason to destroy Ella and thwart the professor. But as a reader, it's not clear why Lisa becomes so violent in her mission to physically damage Ella. This dash of horror definitely adds to the tension, though.
When the first human rushes in, Gaby, it feels like a desperately needed fresh breeze. The friendship which develops between Gaby and Ella adds so much hope and really gets Ella's character going. We also gain a great feel for the professor, although not completely positive. The mixture of girl and doll sets off a heart-warming companionship but maintains a melancholy air.
There was no way I could set this book down once I got into the pages. It took a bit for me to settle into the slightly disturbing world, and the entire way through, it felt like an off place to visit. But that's the point, and it's very well done.
Summed up, this is a great gothic read for an upper middle grade audience. It carries just the right amount of disturbing and creepy moments while maintaining enough golden warmth to help cradle a reader through. 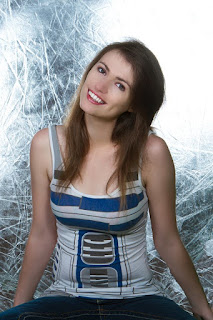 I’m a Jack, or more accurately, a Tyrolin of all trades. In my 23 years, I have walked the red carpet for song nominations, was awarded Australian of the Year in 2014 for Music and in 2015 for the Arts, worked as a qualified paralegal, appeared in TV Shows, hired for product photography, modelled, became a Justice of the Peace, started my own club for school children interested in the arts, worked for a successful magazine company, published a book, hugged a koala and had a show ride collapse on my head.

Curiosity Quills Press (CQ) is a small hybrid publishing company specializing in genre fiction of the highest quality. With 150+ titles in our catalog already and approximately 6 new books coming out each month, there’s never a dull moment at CQ. We work with major retailers such as Amazon, Barnes & Noble, and Audible to ensure that you, the reader, can find whatever you are looking for at your convenience.
Founded in 2011 by Eugene Teplitsky and Lisa Gus, CQ was initially a resource portal for writing and publishing, created in an effort to help writers, like themselves, survive the publishing industry. After rapid success, CQ morphed into publishing press that over time has solidified its share in the market. Now we spend our days searching for the next great escape!
Website | Facebook | Twitter | Goodreads
on December 14, 2015