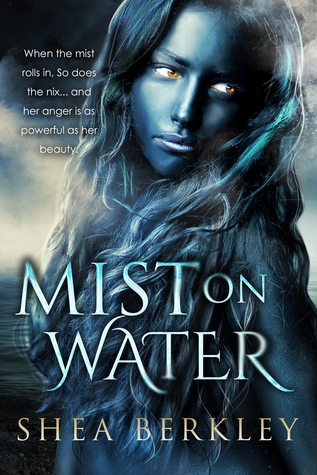 
Long ago, in a far off land, there rose a tale as old as the earth.As long as Ryne can remember, his parents told him to beware the nix in the lake. From the day he was born, the tale of the nix and how she demanded Ryne as her prize for setting his captured father free has defined Ryne’s life. No matter what he does, he can’t shed its curse…in everyone’s eyes, Ryne is doomed to die.Nari is the only one who befriends Ryne, and loves him without fear despite the villagers’ relentless jeers. But when Ryne disappears beneath the cold waters of the lake, everyone believes he’s dead. Everyone except Nari.Now it’s up to Nari to defy her family, her village and the legend of the nix to bring Ryne back from his watery prison or they’ll both be lost. forever.


This is one of those books which grew on me the deeper I went into the pages and had me holding my breath by the end. It starts out with Ryne and Nari as children. The first chapters dealt with the story behind Ryne's curse, and although this information is vital to the rest of the plot, I'll admit that I had a rough time being felt drawn in. I almost laid the book aside but didn't, which was good because as soon as Ryne takes over and we see the world from his point of view, I was hooked.

Ryne is a loving but sometimes mischievous boy, who's in a bad spot by no fault of his own. Under other circumstances, he would be a normal kid and probably grow up to be respected by the entire town. His past...or rather his parents'...makes a normal life for him impossible. This plight, the friendships he forms despite it, and his undeserved fails at attempting to fit in make him a character that one can't help but liking.

Nari, Ryne's best friend and later heart's desire, is the kind of girl I couldn't help but love. She's a tom-boy in the best way possible. Even when she grows, this independence and adventurous spirit is something one can't help but root for.

There's a lot hit on in the story. There's a fight between good and evil, a lovely coming of age, a true love romance, a message about not fitting in, the hope of never giving up, friendship, and even the message of the dangers of gossip and not looking at the people for who they really are. In other words, there's a lot to like along with action and scenes which made me wonder if the heroes could really win.

This book is broken down in three sections, each told from a different character's point of view. While allowing for a great chance to dive into each character's head and understand the exact reasons for their actions, I found the change a little jarring, especially when this head change included a small rewind in the plot itself. But this might not bother others as much as me.

All in all, this is an enjoyable read, and I couldn't wait to see how it all turned out. . . and the ending was wonderful and everything an ending should be.

Email ThisBlogThis!Share to TwitterShare to FacebookShare to Pinterest
Labels: Mist on Water, Shea Berkley, YA Fantasy