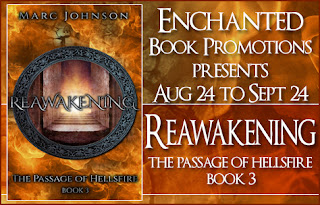 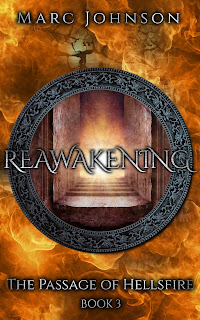 
To undo a mistake made a thousand years in the past, the wizard Hellsfire used his magic to bring down the Great Barrier that once divided the northern and southern lands. In doing so, he nearly brought war to his own homeland, and he afflicted the love of his life, Princess Krystal of Alexandria, with a potent and deadly curse.

Since then, Hellsfire has been working in Tyree with its Elemental Council, to rebuild its war-torn land and find a way to break Krystal’s curse. Now Krystal’s time is running out. As the princess fights for her life, Hellsfire learns that the wizard responsible for the curse—his old enemy Premier—is heading to the Burning Sands to steal the mysterious Jewel of Dakara.

If Hellsfire can capture Premier and learn the secret of the curse, he can save Krystal. But the Jewel of Dakara holds its own deadly secrets, and the hunt will take Hellsfire farther than he ever imagined, and cost him more than he bargained for.

The past is never gone nor buried...

I’m in a dimly lit room. It’s hard to make out my surroundings; all the light is drawn to Krystal, on the other side of the room. She looks as if she’s glowing. She turns to me and smiles, her violet eyes glimmering with playfulness. She poses with her hands on her hips, enticing me to come to her. I can’t resist. I never could.
I rush over to her, grab her hands, and spin her around. Her lighthearted laughter brings a warmth to my soul. Our hands lock onto each other and we spin around and around, laughing all the while.
I stop spinning and reel her in toward me. We begin to dance, our bodies getting ever closer to each other. I’m not a good dancer, but it doesn’t matter. What matters is the fact that we’re having fun, and the heat from her body flows into mine. Our feet stop and our eyes meet. Krystal is almost as tall as me, so I barely need to tilt my head down to kiss her. Our lips connect perfectly and we devour each other.
That’s when I start killing her.
Krystal’s smooth, beautiful face dries out and her veins blacken. She clutches me, and her scream nearly shatters my ears. I try to keep her from falling, frantically casting spells of healing, but my magic has no effect.
“Hellsfire…” she says with her dying breath.
I cradle her lifeless body against mine, wishing I had been able to save her. But I couldn’t. No matter how much magic I had, I was powerless against Renak’s curse. The curse that I had delivered to Krystal with my own touch.
I had had this dream countless times in the months since I had last seen her. And while I always knew it was merely a nightmare, it terrified me more than any army or monster I had ever faced.
A sharp ache spiking through my head tore me from my nightmare and forced me back into the waking world, cold sweat drenching my naked body. My web of protection had been breached. There was an intruder in my room. Instinctively, I hardened the air around me so that it would deflect any blow. I turned, scanning the dark room with my wizard’s sight. Just in time, I caught the faint glow of an enchanted sword above me. If it were the kind that cut through magic, my air shield wouldn’t hold. Instead, I funneled the air magic, using it to push me away from my attacker as he brought his sword down.
His sword sliced through my pillow, barely missing me as I was flung backward off the bed, crashing into the stone wall beyond. I released a portion of my flame, setting my bed ablaze. The flames attacked my intruder but the magic on his sword lit up, keeping them at bay. 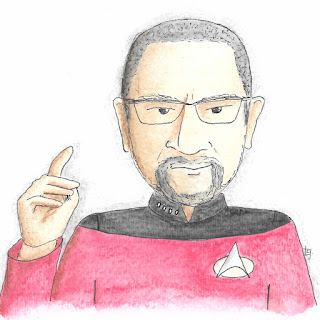 Marc Johnson has moved a lot since his parents divorced when he was two. He also can't answer a straight question and has developed a taste for sarcastic wit over the years. Probably also for the same reason.

He hasn't won any awards, but he does have a deep knowledge of Transformers, Star Trek, and The Twilight Zone--his top three geeky loves. He writes because he loves stories and hopes to one day have written something successful as a movie, TV show, comic, book, magazine, and play.
Marc Johnson also loves to game, whether it be video, card, or board. He loves to test his mind in the challenges they bring...until the zombie, alien, or robot apocalypse comes.

Email ThisBlogThis!Share to TwitterShare to FacebookShare to Pinterest
Labels: Marc Johnson, Reawakening, The Passage of Hellsfire, YA Fantasy