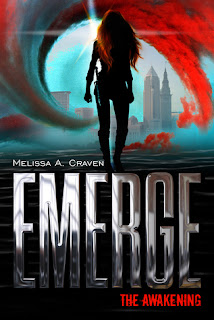 Allie Carmichael has always believed life is simple.You’re born. You live. You die.She has no cause to believe that equation works differently for her, but there has to be a reason the world treats her like a pariah.When an unexpected move to Kelleys Island brings Aidan McBrien crashing into her life, Allie is thrown by his reaction. He doesn’t shrink from her touch. He doesn’t stutter or make a quick exit. He smiles and welcomes her into his circle of friends, who aren’t exactly comfortable with Allie, but they seem to get her in a way most people don’t.Finally, Allie has a real shot at normal and rides that high right up to her sixteenth birthday when she wakes in agony—an experience Aidan insists they have all faced. She struggles in ignorance, uncertain of what is real and what isn’t. When she emerges, Allie is different. She has always been different, but even among her extraordinary friends, she and Aidan are special.As Allie struggles to maintain her tenuous grasp on the power that threatens to overwhelm her, she worries she will lose herself in this strange new world. A dangerous world where she will have to fight tooth and nail to defend the power and freedom that is her birthright.…only Allie hates to fight.

Fifteen-year-old Allie isn't exactly a social butterfly, but then her parents move every few months and for some reason, people don't like to be around her. When she finally does find a boyfriend who accepts her (although he still flinches at her touch), her parent's move suddenly again, this time for good.

First, I enjoyed this story. The more I read it, the more I fell into Allie's world and by the end, I couldn't put it down and ended up staying up much too late into the night. However, the first chapter or so was a little rough to get through. The first scenes are okay--we see Allie at a bonfire with her boyfriend, shunned by his friends. It wasn't clear to me why the others saw her as weird...but then she doesn't know herself. Which was odd (most of the story through). I missed something solid during this first part to prove this--to hold on to because it kind of flapped out there as an 'accept it, it is so.' And the sudden move of the parents was too quick as well as the reactions.

But the rest of the story grew on me. And now, I can't wait to get my hands on book two.

Allie is awesome. A little difficult to grasp at first and sulky, but as the pieces fall together, so does she. It takes awhile to know exactly what's going on with her and those around her, but the author does a great job of letting us feel our way through the uncertainty with her. There are times where I didn't understand Allie's sudden reactions, but this could be hacked up to her coping with her abilities, I guess.  Allie's special-ness isn't something she embraces right away (but she's not completely sure what she's embracing). This hesitation and her need to cling to normal life seems very realistic.

The pace in this story is great. I did wonder when the 'evil' guys would get involved, but until they did, the author kept the action running. Allie doesn't get much sleep, and neither did I as a reader. There are a few moments which slow down as the information concerning other character's pasts and the history of their people is brought to light. But I like the way these small dumps were done--as a story time, making the history itself into a mini-adventure.  There are some logic holes in the powers and how this all works, but I was willing to slide over them and cheer for Allie as she learned to accept the new her.

I really enjoyed the character depth, not only with Allie, but the others as well. Allie's falling into a big family, which loves her and immediately accepts her as their own. They are all willing to give their life for each other, and learning their histories made it easier to understand this devotion. Allie learns to love them, and so did I, the reader.

Summed up, this is a fast-paced, fun read, and I can't wait to get my hands on the next book and see where Allie and her friends are headed.