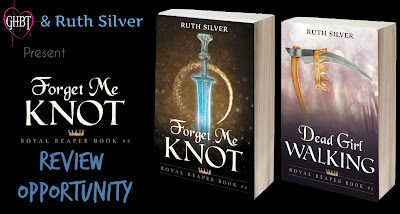 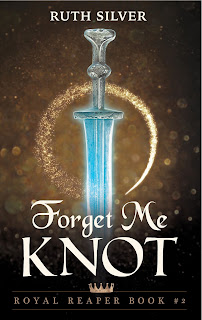 When Wynter explores his newly developed dark angel powers, regret soon fills his heart and mind. Saving a soul isn’t what he imagined it to be, and it puts the grim reaper he loves in grave danger.

Obligated to take the throne as Queen, Mara must face the truth and unravel secrets she may not be ready to accept.

The second book in the Royal Reaper saga takes you on a paranormal fantasy adventure into a world of grim reapers, dark angels, and undead trucidators.


I'm generally a fan of paranormal fantasy and was pleasantly surprised to find that this story has a slightly new twist. Unlike many books like this I've read, this one has a more historical feel to the setting--one with castles and knights, paupers and queens, and a terrifying plague, which has killed many and is already on its second sweep. It was interesting to watch the young Queen Mara not only deal with all the mysteries in the paranormal world,  but simply battle with her new royal position in a time where disease and fear is wide-spread, and hunger abounds. By placing her in this situation, it gave her a strength that I couldn't help but respect.

I'll admit, I didn't read the first book in this series (something I'm going to have to catch up on), and as such, I had a little trouble understanding what was going on in the first few chapters. There's enough information to get the story going and have a general idea of what's happening, but with the somewhat large variety of characters, each with their very own individual background, I would suggest reading book one first.

The writing is well done, and I had no trouble diving into the world or feeling as if I knew the characters personally. There's lots of little details, which make the story tangible, and the characters, in general, are down to earth making it easy to understand their actions. This isn't written from one character's point of view, but rather hops from one individuals scene to another. Although I felt a little jolted at times and would have liked to remain in a couple scenes longer (some were pretty short), this scene and point of view jumping allowed the story to take on a depth and complexity which otherwise, couldn't have been achieved. And it's exactly this complex weave which made the plot really enjoyable.

I can recommend this to all YA Paranormal fans, especially those who have a special love for castles, and kings and queens.

Ruth Silver is the best-selling author of the Aberrant trilogy. With a passion for writing and a love of story-telling, Ruth is actively writing two series: Royal Reaper and Orenda. She also writes The Federal Agent Chronicles, an adult romance series under the name Ravyn Rayne for Blushing Books. Her interests include traveling, reading, and photography. Her favorite vacation destination is Australia. Ruth currently resides in Plainfield, Illinois.

Email ThisBlogThis!Share to TwitterShare to FacebookShare to Pinterest
Labels: Forget Me Knot, Ruth Silver, YA Fantasy