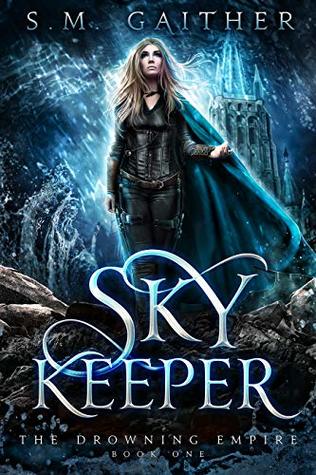 Welcome to the World Below, where the keepers command the sky, but the commander of the keepers controls the empire... For centuries, the four kingdoms of the Caspian empire have remained safe and hidden below the ocean, protected from the Surface World—and from that ocean that separates them—by a great barrier maintained by magic. Aven Talavir has spent her entire life learning to be a keeper of that barrier, channeling her powers into maintaining and healing it. But now an impossibly sinister force seeks to shatter it. To stop the looming flood of destruction, Aven picks up her knives and sets off on a quest to find an ancient power that may be able to permanently heal the makeshift sky. Reaching it will mean fighting her way through dangerous politics and deadly magic, all while finding love and friendship in unexpected places— Only to realize that the greatest treachery may not lie in the breaking sky, but in the very hearts of the people around her. The perfect next read for fans of Sarah J. Maas, Tamora Pierce, and Megan Whalen Turner. If you enjoy strong female leads, feisty mythical creatures, breathtaking new worlds, and unique magic systems, pre-order the first book of this trilogy today!

Rich world building, fast-paced adventure, a dash of romance and a wondrous quest make this a book to get lost in and wish for the continuation as soon as the last page is done.Aven lives in a world caught in a layer between the water—ocean above and below. She is a keeper of the barrier which holds the ocean of the sky from breaking and flooding her world, one of many. Although her world as existed for eons, the barrier is now growing weaker, not only in the kingdom in which she resides, but in the surrounding areas as well. Or so rumor has it. Her king refuses to admit a problem exists and keeps the keepers close to his land. When Aven's brother dies during the sealing of a dangerous rift, she embarks to do the task he was secretly going to undertake...one that leaves her hunted by the king himself and has put a price on her head. Aven is determined to find an item, which myth claims will hold the skies permanently and save them all. But with the entire kingdom and more hunting her down...and her hopes laid on something which may not even exist...the quest quickly becomes even harder than she ever dreamed it would.This is a read for fantasy friends who enjoy an exciting adventure and a little girl power on the side. Aven is a character easy to root for. She is powerful but not more than many of the other keepers; she is a little risk friendly but not stupid; and she does make mistakes. She's not even sure that what's happening around her is necessarily what she wanted. But she tries to keep her heart in the right place and do what is right, and that's what makes her wonderful. Aven is by no means in this adventure alone. She has several friends who support her and meets more along the way—as well as enough adversaries. Trust needs to be won, and each character has their own role as well as personality. While romance does come into play, it by no means overplays the main plot. The adventure holds the center stage the entire way through.The world is quite different than what I suspected and promises many more surprises in the upcoming series. The author lays out the details in just the right amount and at the right time, to allow the richness of the world to unfold and maintain a fairly secure base in its own logic. There are many secrets and mysteries, but that's part of the adventure...and something even Aven questions along the way. It is an exciting start to an intriguing series, and I'm looking forward to see where it goes next.I received an ARC copy and enjoyed the tale quite a bit.