Review: Lion Down by Stuart Gibbs 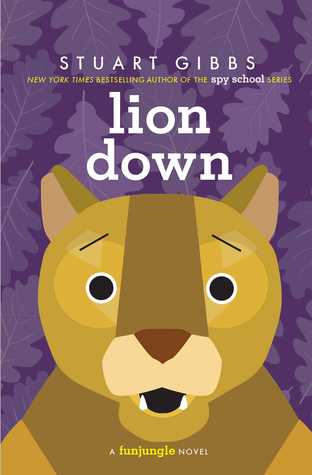 For once, operations at the enormous zoo/theme park appear to be running smoothly (except for the occasional herring-related mishap in the penguin exhibit) and Teddy Fitzroy is finally able to give detective work a rest. But then a local lion is accused of killing a famous dog—and the dog’s owner, an inflammatory radio host, goes on a crusade to have the cat declared a nuisance so it can be hunted. But it looks like the lion might have been framed, and a renegade animal activist wants Teddy and Summer to help prove it. Soon, Teddy finds himself wrapped up in the middle of his most bizarre, hilarious, and dangerous case yet.

Mixing humor with animal excitement and mystery, this is a fun read until the very last page.

Teddy is having quite the time with the new fish-cannon, which is supposed to be the new way to feed the penguins, when another problem appears. A dog has been murdered, and not just any dog. It's an important dog of an important person. The murderer is said to be lion. When the owner of the dog makes it his quest to have the lion qualified as dangerous and killed, Teddy needs to prove that it wasn't the lions fault. But no case is easy.

This is the first book I've read in the series, but that didn't cause any difficulties in sinking into the characters and the mystery. The author does a tremendous job at grabbing the reader right away. There's a lovely mix of wit, humor and dangerous tension, which makes it impossible to put this book down. Every page hooks, and each situation offers something new—whether mystery wise or simply fun on the humor end of things.

The characters are very easy to connect with and root for. Each interaction was a treat, and just right for the intended age group. There isn't an overfill on character depth, leaving them more with a cartoon feeling, but this works very well in the series and is sure to meet readers the way it should.

This is a fun read and I can only recommend it.

And here he is...
Stuart Gibbs is the author of the FunJungle Series, as well as the New York Times bestselling Spy School and Moon Base Alpha series. He has written the screenplays for movies like See Spot Run and Repli-Kate, worked on a whole bunch of animated films, developed TV shows for Nickelodeon, Disney Channel, ABC, and Fox. Stuart lives with his family in Los Angeles. You can learn more about what he's up to at StuartGibbs.com