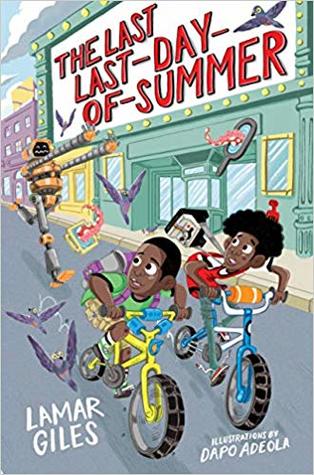 
The Hardy Boys meets The Phantom Tollbooth, in the new century! When two adventurous cousins accidentally extend the last day of summer by freezing time, they find the secrets hidden between the unmoving seconds, minutes, and hours are not the endless fun they expected.
Otto and Sheed are the local sleuths in their zany Virginia town, masters of unraveling mischief using their unmatched powers of deduction. And as the summer winds down and the first day of school looms, the boys are craving just a little bit more time for fun, even as they bicker over what kind of fun they want to have. That is, until a mysterious man appears with a camera that literally freezes time. Now, with the help of some very strange people and even stranger creatures, Otto and Sheed will have to put aside their differences to save their town—and each other—before time stops for good.

With a whirlwind of adventure, imagination and fun, this is a tale which grabs from the first page to pack surprise after surprise the entire way through.

Otto and Sheed are not exactly happy about it being the very last day of before school starts again. They aren't sure what to do with the day, but run into Mr. Flux who gives them a camera and claims it will help them capture the moments. After two photos, a portal suddenly opens up and Mr. Flux battles with a stranger...but then, Mr. Flux is doing strange things himself. Time is frozen, and Otto and Sheed head into a grand adventure of odd characters and things, each having to do with time, and some even with a dash of philosophy. Somehow, the need to figure everything out while experiencing the most memorable last day before school ever.

I have not read any of this author's works before and am completely taken by the imagination and fun built into these pages. Adventure sweeps in with the force of a tidal wave and refuses to let go. At every turn, Otto and Sheed run into a new, fascinating situation which shoots off in the most amazing and humorous directions. It's never clear what they'll run into next, and they do run from one amazement to the other as fast as the pages flip.

There's a clever connection between all of the quirky elements, which first grows clear as the pages turn. While it seems like every moment is grabbed out of fun and fantasy, it soon becomes clear that there is a pattern of time and experience. The notes Otto and Sheed jot down sit like clues or realizations in a mystery, although this isn't really an mystery in the traditional sense. It's more fun and entertaining to follow them through the situations.

While I enjoyed the fast paced fun, it rolled a bit too quick and quirky at times, leaving some things to get blown over too fast. Still, there's a wonderful sense of working together, and the adventure does drag the reader in. Although it's slightly long, I see readers ages nine to ten loving the humor and fun.

Lamar Giles is a well-published author and a founding member of We Need Diverse Books. Lamar SPIN (Scholastic).
has two novels forthcoming in 2019: his debut middle grade fantasy THE LAST LAST-DAY-OF-SUMMER (Versify / HMH) and his fourth YA thriller

Lamar Giles is a two-time Edgar Award finalist in the YA category, for his debut YA thriller FAKE ID (HarperCollins, 2014), and his second YA thriller, ENDANGERED (HarperCollins, 2015). His third YA thriller, OVERTURNED (Scholastic, 2017) received this glowing New York Times review, and was named a Kirkus Best Book of 2017. You can see the book trailer for OVERTURNED here. FAKE ID has been optioned by Sony Pictures.
Lamar is a contributor to the YA anthology THREE SIDES OF A HEART (HarperCollins, 2017), the editor of the We Need Diverse Books YA short story anthology FRESH INK (Random House 2018), a contributor to the forthcoming YA anthology BLACK ENOUGH: STORIES OF BEING YOUNG & BLACK IN AMERICA (HarperCollins / Balzer & Bray 2019), and a contributor to a forthcoming We Need Diverse Books middle grade anthology THE HERO NEXT DOOR (Random House 2019). He has published several short stories for adults. You can see tv interviews with Lamar here, and here, and here, and in a truly fun “Fun Facts” short interview, created by HarperCollins.