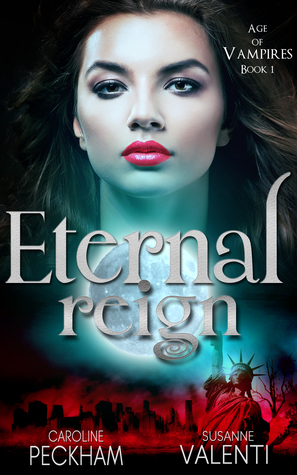 ETERNAL REIGN
Age of the Vampires, Book One
by Caroline Peckham and Susanne Valenti
YA Paranormal / Dystopian

Within the Realms, human life is defined by blood.

But there is a way out: The Testing.

No one knows what happens to those who pass. But rumours of the powerful vampire family who want them spark fear in the chosen few.

When sisters Callie and Montana pass the test, they rebel against their fate and plan to do what no human has ever done.

But the vampires have eyes everywhere and the girls are soon torn apart, sending them spiralling down two dangerous paths.

One to the vampires.

The other to the slayers.

With Callie in the hands of a fierce warrior and Montana trapped in a terrifying ritual run by the royal vampires, can they find their way back to each other before it's too late?

Or will their fates be decided by the deadly men who shadow them..?

The suppression of a dystopian future hits an interesting paranormal twist in an exciting world where vampires hold the rule.

Callie and Montana live with their father in Realm G, a fenced in town where food is scarce and every move is controlled. Unlike many families, their father has never let the thought die that life could be better. The testing is the only way out, but no one knows what horrors that might lead to since none who are taken ever return. This time Callie and Montana are both chosen, both pass, and both are to be taken away. When Callie stumbles across a forgotten sewer tunnel which leads to the world beyond the fences, her father decides its time for their escape, but the vampires discover them. Only Callie makes it. Montana lands in the nest of the vampires; their purpose with her is more than unclear. Callie is stuck in the wilderness with a warrior who has slept almost a thousand years. And their father is to be drained alive. But the girls are determined to escape again and safe their father's life.

I was a little unsure when grabbing up this book, afraid the vampire side might prove a bit strange. But my fears were unnecessary. This is a grabbing, tension filled and exciting read. While the idea of ruling vampires sets off images of chaos in my mind, the authors laid a grounded framework of a smooth running, tyrannic society. The scenes start with Realm G, which reminds of a concentration camp in town size...a bit like the Hunger Games. Callie and Montana's difficult situations come across clear and gain immediate sympathy. Especially Callie is a little reckless but not overly so. Their determination to find something better stays in the realms of believability and their love for each other (family) is inspiring.

The book is split into the girls' two points of view, which works wonderfully considering each heads in a very different direction. The transition back and forth runs smoothly, and is never confusing. I couldn't pick a girl I'd rather follow, since both predicaments were engaging. Their journey's are so different, and the future tension this might bring during the rest of the series is already forming a shadow of upcoming uncertainty.

While there are hints of romance, it remains only as hints as the girls have enough on their plates to deal with. But it's enough of a tiny spark to begin a bit of tension in that area to grab and tease as well.

This is an exciting read for paranormal and dystopian fans. The vampires are dangerous and the situation held me on the edge of my seat. It will be exciting to see where the series takes the two girls next.