Review: Wait! What Happened To 8?? by Jon Lefkovitz, Illustrated by Joe Bearor 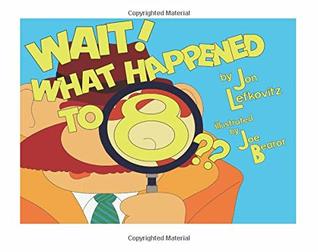 
This counting book follows a hapless detective on a quest to locate each of eight missing numbers with the help of children he meets along the way.

Humor and fun rank high in this easy to read picture book, which happens to teach counting along the way.

Keeping a strict atmosphere of detectives and sleuthing, the first page illustrates a newspaper with a headline making it clear numbers go missing, and then shows the numbers from one to ten. From here, the detective in traditional trench coat and wielding a magnifying glass finds himself in various settings (stage, outside, circus, beach, etc) where numbers suddenly go missing. One... Three... But where is two? The detective asks over and over again 'What happened?' adding a nice, repetitive rhythm as the listeners help him search for those missing digits.

This is not a serious read but keeps fun in high gear as each scene comes across a little stumbly and bumbily. While the words are written with tons of expression to make it a great read-aloud (and there isn't much text), the illustrations add the perfect touch. Humor hits on every page as listeners/readers can figure out themselves which number isn't there and watch as the detective becomes unsure. The other characters in each scene vividly show their confused emotions making each situation giggle worthy. Humorous details sprinkle the pages, adding even more fun to the entire thing.

This is a great read to introduce young listeners to numbers and counting, while making the laugh the entire way through.

Jon Lefkovitz is an award-winning filmmaker and editor. He co-edited the election documentary 11/8/16, available on Netflix, iTunes & Amazon. Rubber Soul, his feature film about John Lennon, premiered at the South by Southwest Film Festival and was awarded the Founders Prize by Michael Moore at the Traverse City Film Festival.

Jon has also edited commercials and trailers for clients including Sony, Disney, Paramount, FX, Tribeca Film and Starz, as well as dozens of mashups that have been published by Slate, the Huffington Post, and the Onion A.V. Club. He loves all genres but his favorite kind of film appeals to all ages; he dreams of one day making a feature-length animated musical for the whole family.

Jon lives with his wife Talia, son Emmett and dog Beta in the great city of Pittsburgh where he teaches filmmaking. Wait! What Happened to 8?? is his first children's book.

An avid fan of comic books, Joe has also entertained a love of illustrating which he’s fostered over the years. Wait! What Happened to 8?? is his first children's book.