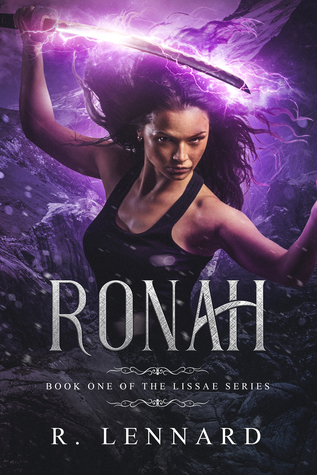 RONAH
The Lissae Series, Book One
by R. Lennard
YA Fantasy


Shari Dawn seems to be the most boring girl on Ronah, an Island on the Realm of Lissae, where almost everyone uses Innarn, and Shari is relentlessly bullied because she doesn't use magic. But when her secret is uncovered, and it's revealed that she's the Altoriae, the General fated to save her Realm in the war to control Lissae, time starts to count down on an ancient curse designed to test her skills. Caught in a fight against the clock, Shari must save her Realm with the team she never wanted.

With the curse at work and only ten days to save Lissae, Shari faces challenges harder than keeping her secret. Will she overcome them, or will Lissae end up under the control of a creature from her deepest nightmares?

Don’t miss Ronah, the first of the Lissae series by R. Lennard. If you like epic battles, relentlessly enemies and elemental magic, then this young adult fantasy novel will have you turning the pages!


Action packs the pages of this fast-paced and engaging read about an intriguing world and dangerous creatures.

Ronah is an island, a sentient island, which is part of Lissae (a sentient realm). Both of these are part of a series of realms and islands, all with their very own types of creatures. Not all creatures are friendly. To protect the Ronah, every so often a champion is born, the Altoriae, and the current Altoriae is unlike the rest before her. While most creatures on Ronah possess a type of magic, some are blank. Shari is a blank, or so her tests have determined. In fact, she is so talented that she's been able to shield all tests. As she grows up, she learns from Ronah and Lissae how to train her powers because she knows that once her identity is given price, her life will never be the same. But she can't hide forever and soon finds herself up against the deadliest creatures the realms have to offer.

I sat down and had to read this book in one sitting. It's that engaging. And I can't wait to get my hands on book two to see what happens next. That said, this isn't the easiest book to write a review about.

The author has put together a very complicated world with a wide variety of characters and monsters. There is constantly something happening, and each situation is more dangerous and sinister than the last. To say Ronah has her hands full is an understatement. She's a warrior with a huge task, one she's up to but not without help on her side. Still, Ronah isn't the all-powerful warrior that one might expect. The book starts with her as a very young child and spends the first few chapters watching her meet Lissae and Ronah, and come into her strength. These chapters, while cementing the background and Shari as a character, went on longer than necessary...and yet, held my attention. There are violent scenes as well...which might be harder for more sensitive readers to handle.

There are huge battles in this book, vivid and well-described ones. Others, are mentioned in past tense with just a quick remark. While some moments sit and draw in, others are told and superficial. And everything happens so fast! In this sense, it wasn't the strongest read and normally, would have caused me to lay it down. But there's something about this book which holds. The characters are intriguing. There are secrets, and intrigue and so many things hiding in the shadows. And Shari is a heroine who is easy to connect to and cheer for the entire way through. Every turn adds something unexpected and it makes it impossible to set this read aside.  So while I normally would see problems in the writing, it's hard not to give the book full marks since I thoroughly enjoyed the read and can't wait to see more of this tale.

In other words, YA fantasy friends who love action, intrigue and all sorts of bumps in the night...and enjoy a tough heroine who isn't always tough. And maybe the hint of romance thrown in...which it might not be at all...  these readers will get lost in this world and enjoy it.

I received a complimentary copy and enjoyed it so much that I wanted to leave my honest thoughts.