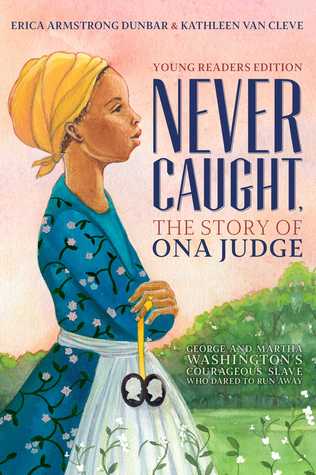 A National Book Award Finalist for Nonfiction, Never Caught is the eye-opening narrative of Ona Judge, George and Martha Washington’s runaway slave, who risked everything for a better life—now available as a young reader’s edition!
In this incredible narrative, Erica Armstrong Dunbar reveals a fascinating and heartbreaking behind-the-scenes look at the Washingtons’ when they were the First Family—and an in-depth look at their slave, Ona Judge, who dared to escape from one of the nation’s Founding Fathers.
Born into a life of slavery, Ona Judge eventually grew up to be George and Martha Washington’s “favored” dower slave. When she was told that she was going to be given as a wedding gift to Martha Washington’s granddaughter, Ona made the bold and brave decision to flee to the north, where she would be a fugitive.
From her childhood, to her time with the Washingtons and living in the slave quarters, to her escape to New Hampshire, Erica Armstrong Dunbar (along with Kathleen Van Cleve), shares an intimate glimpse into the life of a little-known, but powerful figure in history, and her brave journey as she fled the most powerful couple in the country.

This is a little known historical event brought to life with care and interesting insights of information.

Ona Judge was born as a slave into George and Martha Washington's household. Taking the surrounding historical events and known details concerning the Washington's life, this book paints the picture of how Ona Judge's life might have been while growing up to the time of her escape and beyond.

While I was aware that the Washington's held slaves, the history surrounding Ona Judge was new to me. The historical details in these pages are interesting and paint a closer picture of the life of the Washington's and those around them. The authors take great care to keep the information factual, while allowing a more story like atmosphere to touch Ona and her life. Since not everything is known about Ona, the surrounding facts are taken into account and then used to surmise some stages of her life. However, the authors make sure that these fact-based assumptions are clear for what they are in the writing. It makes for an interesting read and helps the reader submerse themselves into the happenings at that time while gaining an emotional connection to the historical figures. I found it intriguing.

This book is the rewrite of the adult version, Never Caught: The Washington's Relentless Pursuit of Their Runaway Slave Ona Judge,  but unfortunately, it doesn't quite hit the level of the intended audience, ages 9 to 12 or so. While the writing itself does bring the story down to the needed reading level, the historical events and names are dropped, often with belief that readers already know some of the background information. This might be the fault of the educational system, but many readers at this age do not know what the Articles of Confederation are, have no clue what the Continental Congress is, or are ready to read things such as 'nonconsensual encounter where a man uses his strength...to overpower a woman.' Yet, the authors point out in sudden style change that moving at that time 'was before vans and dollies and U-Hauls'. It makes for a clumsy mix on the what level of  knowledge and maturity is expected from the reader.

This is an intriguing read, and I enjoyed every moment of it, but I'm not sure what audience it's intended for.

Erica Armstrong Dunbar is the Charles and Mary Beard Professor of History at Rutgers University. she also serves as Director of the Program in African American History at the Library Company of Philadelphia. Her first book, A Fragile Freedom: African American Women and Emancipation in the Antebellum City was published by Yale University Press in 2008. She is also the author of Never Caught: the Washingtons' Relentless Pursuit of Their Runaway Slave Ona Judge.


Kathleen Van Cleve teaches creative writing and film at the University of Pennsylvania. She has written three books, including the award-winning middle grade novel Drizzle and lives in Philadephia with her husband and sons.