Review: Laith the Lion Goes to Palestine by Jameeleh Shelo 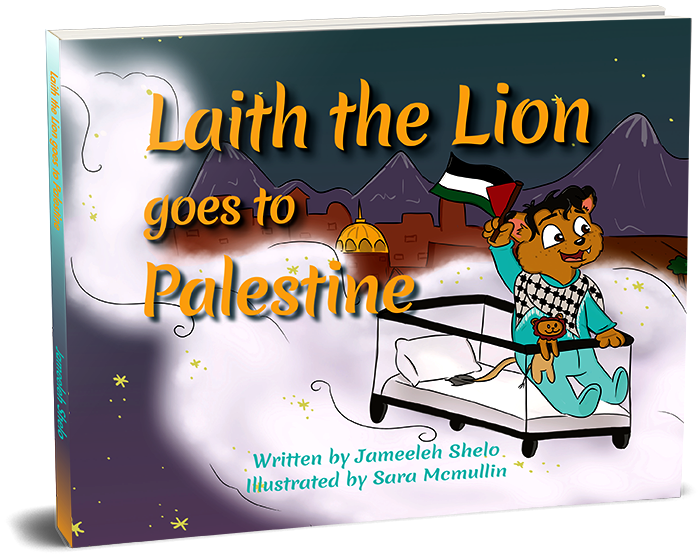 
Little lions of any age can join Laith in his flying crib and make new friends in sunny Palestine.  Inspired by the author’s son, Laith the Lion encapsulates the spirit and connection many Palestinians feel towards their culture, ancestry and homeland. It’s a journey of discovery, pride, and warmth that your child will want to experience over and over again.

Or purchase from the website...
which I noticed, isn't only cheaper than Amazon, but also has a bundle with a Keffiyeh (bib)
https://www.laiththelion.com/store.html

This is a night time adventure which flies beyond the crib and into a wonderful land with many friends and family to meet along the way.

Laith needs to go to bed, which maybe isn't the most fun thing to do...unless the crib flies into adventure. Soon, Laith travels to his relatives, but none of them really are up to playing with him. So he continues on until he reaches Palestine. There, he meets many friends, warmth, and fun.

Laith is a lively lion cub, and it's fun to watch him as he heads to bed. It's something young listeners will easily connect with and share some of the feelings as Laith does. His very loving family creates a wonderful scene. But then, the entire story is wholesome in this way. Every relative and friend Laith meets, embraces him with friendship and joy, creating the perfect atmosphere for not only a bedtime read. The addition of Palestine adds a nice touch and allows young readers to learn a tiny bit about a country they may have not heard of before. This section of the story doesn't go too deep, but rather hits with very age appropriate scenes and moments. It leaves an impression without overwhelming with information—a nice balance.

The illustrations are bright, warm and cheerful to fit right along with the text. Laith is an easy lion cub to love, and the fun of his adventures radiates from the accompanying, colorful scenes. My children were a little curious why Laith, his relatives and friends were depicted as animals, while the wonderful people he met in Palestine were human. They also wondered at his parents who were a giraffe and a bird. But the wealth of animals didn't hinder their interest in the story and created a nice guessing game as to which animal each upcoming character was.

This is a fun journey which gives young readers a glimpse at another country in a warm and delightful way.

The Author...
Jameeleh Shelo  is a native Chicagoan and proud Southsider. Jameeleh wrote Laith the Lion because she wanted her son to have a positive representation of his culture.
Jameeleh is an Emmy award-winning writer, producer, and performer. She attended Columbia College (Chicago) where she earned a B.A. in Television Writing and Production. This degree gave her the skills necessary to become a waitress. Since no one would trust her to handle food she became a TV producer. As a creative outlet she began doing improv, sketch and stand-up. She has performed with Second City's Brown Co., improvised at iO and Annoyance theater, and performed her one woman show, My American Cousin at UCB, Magnet and PIT in New York City and at Silk Road Theater, iO, and Second City in Chicago. She is also a regular at the New York Arab-American Comedy Festival. Jameeleh is very lucky to have interned and worked for some very funny people in her career. She interned at Late Night with Conan O'Brien and worked for Stephen Colbert, Lisa Lampanelli and Cedric the Entertainer. If you ask any of these people about her they will pretend to remember her. In addition to that, she has produced for TBS, Comedy Central, HGTV and DIY Network, Harpo, TLC. Jameeleh is the former Executive Director of the Chicago Palestine Film Festival and believes that all people have a right to share their narrative in any media they see fit. She wants to thank you all for taking time to read this and will now go back to sharing her narrative via macaroni necklaces.

The Illustrator...
Sara McMullin is an illustrator and writer who has written for PBSkids. She is also the creator of The Center Town, The Misadventures of Sea Cucumber Man, Willow, and the Stupid Pillow comic. As a child Sara’s mother gave her the option of either theater and art classes or a Bat Mitzvah. She chose the former and a love of storytelling was born (along with a few unexpected bedroom wall murals to her mother’s dismay.) With the aide of her big family she develop her talent for storytelling and her visual style.  She honed her craft during college as a part time camp counselor, using her skill at storytelling and art to entertain her campers. Sara also took Arabic as a second language in college and discovered her artistic sensibilities helped her master arabic calligraphy. After college Sara developed an interest in performing comedy, improv, and sketch. This led her to Second City Chicago, where she studied, performed and worked. It was there she met Jameeleh.Sara believes every kid should have a storybook they can relate to. Laith not only tells a great story about imagination and far away places, it teaches kids and adults about the Palestinian Culture.

Sara’s favorite kids' books are Calvin and Hobbes, The Carp in the Bathtub, and the Ramona series. She still loves creating fantastic visual tales for her nieces and nephew and is always ready with a pencil and paper.Sara also mixes her comedy background and love of art for the adult world, under the name Stupid Pillow.  A name that stems from a think tank exercise where someone asked “What else can you use a brick for?”. Sara said “ A stupid pillow.” To which the director smiled and said: “I like the way you think.”
​Stupid Pillow/Sara enjoys creating “lifestyle” comics, humorous “Reject Greeting Cards,” Branding art for small businesses, and more. You can see her work on Instagram and Facebook.


You can discover more about Laith the Lion at the website:
https://www.laiththelion.com

Thoughts from the author...

Once upon a time there was a tiny baby named Laith who really hated to sleep, and enjoyed crying instead. In fact, his VERY cool parents often joked that he had FOMO (“fear of missing out” for the non-millennials) and wanted to see EVERYTHING. Normally the parents would applaud Laith’s curiosity and thirst for knowledge. However, Laith was a baby and since he wasn’t quite mobile yet, this particular personality trait was exhausting to his parents. They tried everything to get him to sleep - rocking, singing, bribery (does baby want a Tesla? No. Ok.). Nothing worked. Finally they tried reading books. The books worked! Laith loved the books. The parents loved Laith. Everyone was happy.

Except one thing - there seemed to be an abundance of books about balls and moons and trucks. There were books with kids named Johnny and Susie and Tommy and Bob. There were books about wolves and wild things, books explaining rocket science to babies and mischievous cats in hats. There were princes and princesses galore and they fought dragons and witches. Mermaids swam and fish forgot, Disney made billions and Mr. Seuss got his medical degree… but there were no books about Palestine. ​


Laith’s mom realized that her son would eventually be able to tell the difference between a red and blue ball (not that this isn’t a handy skill) but his identity is something he might struggle with. Laith’s mom wanted his first images of Palestine to be positive. She wanted him to see himself in a story and appreciate his culture.
​
Luckily Laith’s mom decided to write a children’s book. Children’s books need pictures. Since Laith’s mom has trouble drawing even simple stick figures, she asked her talented friend Sara to illustrate the book. After several discussions revolving around spirit animals and aspect ratio, Laith the Lion Goes to Palestine was born.

Laith the Lion Goes to Palestine is inspired by real images of Palestine and infuses a whimsical tale with real location, culture and feeling. The characters and story are inspired by real people and events. It’s a book for anyone who wants to give their child a heartwarming glimpse into a land so often misunderstood.

Laith’s mom wants all the little lions out there to know that they are the authors of their own story and hopes this book inspires them to soar.