Review: Hibernate With Me by Benjamin Scheuer, Illustrated by Jemima Williams with Giveaway! 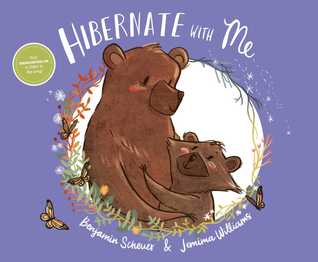 Hugs, cuddles, and warm feelings of security roll off of these pages as a mother bear ensures her baby bear that she's always there for it.

The message in this book is loud and clear, and is one kids can never hear enough—they are loved and have someone who will always take care of them no matter what the situation. The forest scenes and nature give a calming atmosphere as the seasons come and go. Sometimes it's dark, and sometimes it's light and filled with playful moments. Sometimes the bear wants to hide, and sometimes it feels confused. But the narrator, the mother bear, is always there with hugs and warmth and offering comfort. It creates the perfect cloud of happiness as a bedtime read.

The illustrations are as warm as the message and bring across the natural scenes very well. They are simple, yet detailed enough to allow readers to discover something new the next few times they flip through on their own. Baby bear is as cute as can be. Each scene shows a different mood, allowing the reader to connect with the story. The only thing which bothers a bit is the flow of the text. It stumbles a little, and although it is a song, which one can hear/view online (a lovely bonus), even that is rather complicated. It's not one for kids to sing along to. Still, this is a wonderful read with lots of good feelings and thoughts. 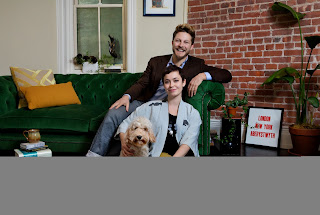 Benjamin Scheuer is a Drama Desk Award–winning singer-songwriter and playwright. He toured his solo show The Lion around the United States and Europe, giving more than five hundred performances. His album Songs from The Lion was released in 2016 (Warner/ADA) along with four animated music videos, which have been shown at film festivals around the world. With photographer Riya Lerner, Scheuer created the book Between Two Spaces, the proceeds of which raise funds for the Leukemia & Lymphoma Society. Scheuer lives in New York City with his wife, illustrator Jemima Williams, and their dog, Porthos.  Visit him online at BenjaminScheuer.com.

Jemima Williams is a British illustrator and writer who worked for nearly a decade on the BAFTA Award–winning animated show Peppa Pig. She illustrated Andy Nyman’s The Golden Rules of Acting and has been a frequent contributor of illustrations and writing to the online women’s magazine Standard Issue. Jemima lives in New York City with her husband, Benjamin Scheuer, and their dog, Porthos. Visit her online at JemimaWilliams.com.