Review: Curse of the Fae Queen by Delia Castel 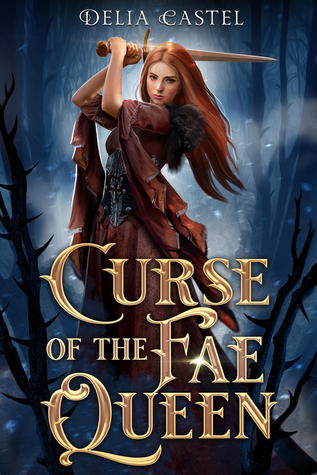 A Huntress of Faeries. Five cursed Fae Princes. An evil that will destroy the world. When Eighteen-year-old Neara saves a villager from the clutches of a deadly faerie, the Fae Queen sends warriors to abduct her dying father in revenge. To gain his freedom, Neara must venture into the Shadowlands and obtain three enchanted objects under the supervision of the bestial Prince Drayce. As Neara and Prince Drayce grow closer, she discovers the Queen’s scheme to release an ancient evil and enslave the mortal world. To thwart these plans, she must break the curses of five Fae Princes, but the cost of doing so is her Father’s life. Torn between saving the human realm and saving her father, Neara must navigate this treacherous world and choose between love, liberty and power. Curse of the Fae Queen is a reverse harem fantasy adventure for fans of A Court of Thrones and Roses and A Song of Ice and Fire!

Danger lurks around every corner in this fast-paced tale, where a young woman tries to escape the most secretive and vicious creatures, which most humans don't know exist.

Neara, now eighteen, and her father have been trying to hide from the fae for as long as she can remember. Most people don't believe they exist, but she has the rare ability to see them—something which makes her a target if they ever find out. But soon Neara and her father will be free of the years of living in fear; all they have to do is gain passage on one of the ships and settle across the sea. It's only a few days away, but when Neara sees a fae torturing the mayor's daughter in the most distasteful and public way and has the intent of driving her to suicide, Neara can't just stand by. After the rescue, she's sure she didn't get caught, but when three high fae arrive at her door and beat her father, she knows she'll be lucky to survive.

While fitting the reverse harem genre, this tale encompasses so much more. Neara is a scared young woman with a strong sense of right and wrong. Although she hides, she can't let people suffer either. She has a bit of a harsh personality at times, but in general, she's trying her best to do what's right while surviving—an almost impossible balance in her circumstances. While the fae are gorgeous, they are not to be messed with. The game Neara plays is very deadly and trust is almost an extinct word. There is intriguing, secret plots, and twists which leave a gasp of surprise. Even the reader isn't sure what the character's true intentions are until the last page.

Action is laid thick and keeps the story going full speed ahead. Yet, the author does a nice job building the world and laying out a fairly solid foundation. There are battle scenes, but much of the tension also lays in the dangerous games each character plays. It's hard not to root for Neara as she attempts to find a way to save her father and later, humanity without loosing herself. The dance on this tight-rope is tense and hooks.

As to the romance, it's there but it's a game in and of itself. Nothing with the fae is easy, and neither is love. While this is a reverse harem, it is a very slow burn one—something I appreciate. Only one love interest is presented in this first book, while the others are quickly mentioned but left to simmer for later tales...adventures I'm looking forward to. This is not a hot love but takes time. There is a 'hotter' scene toward the end, but not over the top for Young Adult reads.

In other words, fantasy/fae friends are going to love this book as well as slow burn romancers and those who enjoy a bit of reverse harem possibility thrown in. It will be fun to see where the series goes from here.

Email ThisBlogThis!Share to TwitterShare to FacebookShare to Pinterest
Labels: Curse of the Fae Queen, Delia Castel