Review: Corpse and Crown by Alisa Kwitney with Giveaway! 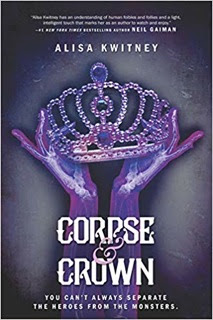 
Agatha DeLacey’s family isn’t rich or titled, so studying nursing at Ingold’s East End hospital in London is a rare opportunity for her. Despite the school’s focus on the innovative Bio-Mechanical program, Aggie cares more about the desperately poor human patients who flood the hospital, even if that means providing unauthorized treatment after-hours…and trusting a charming, endlessly resourceful thief.
But the Artful Dodger is barely a step ahead of his underworld rivals, the menacing Bill Sykes and mercurial Oliver Twist, and Aggie’s association with him soon leads her into danger. When a brutal attack leaves her blind, she and the Dodger find themselves at the mercy of an experimental Bio-Mech surgery. Though the procedure restores Aggie’s sight, her new eyes come at an unnerving cost, and the changes in Dodger are even more alarming—instead of seeing Aggie as the girl he fancies, he now views her as a potential threat.
As war between England and Germany brews on the horizon and a sinister medical conspiracy threatens to shatter the uneasy peace in Europe, Aggie and the Dodger must find a way to work together so they can protect their friends and expose the truth…even if it means risking their own survival.

Set in foggy London's past, this tale takes an interesting turn on Oliver Twist and weaves an intriguing magic, which is hard to put down.

Agatha is a nurse in training and has a difficult path, but finds herself in one of the top places to learn. That the school's focus is on Bio-Mechanicals doesn't phase her in so much, especially since she is more concerned with people who need care. Still, London holds a life different than she's accustom to, which also leads her to Dodger, an intriguing man who sits more in tune with the underground that Aggie should appreciate. When an attack leaves her blind, she turns to her school and their specialty for help, but the results lead to more than she expected.

This is the second book in the series, and while it isn't too difficult to sink into the story without reading the first book, I wouldn't recommend doing this. The characters do build on the foundation laid in the first novel, and it makes the second easier to appreciate.

This second novels shifts a bit from the first, allowing Aggie to now take center stage. And what a wise choice this was! Agatha is wonderful as a nurse in training—unsure but determined, uncertain but clever, and perhaps, a little naive but can take care of situations as they arise. Her heart is golden, and despite what others say, she sticks to what she believes. She learns a lot in these pages and slips into the role she has to play, while maturing along the way. It was a treat to get to know her and root for her until the last page.

The author does a nice job of allowing Oliver Twist to be mirrored in some ways, but take a completely new life in other. The setting and scenes build the perfect atmosphere and allow the reader to sink right in, seeing an atmosphere similar to the classic without copying it completely. The addition of bio-mechs adds a fresh change but doesn't over-power the tale either. Many issues are touched up one which lead to thought, but yet, the story drives forward with a quick paced plot and plenty of action and intrigue.

It's an interesting read and one that especially historic fantasy fans are sure to enjoy. 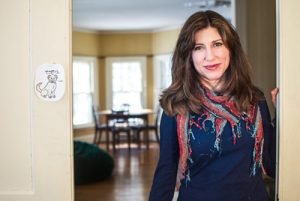 Alisa Kwitney was once an editor at DC Comics/Vertigo and is an Eisner-nominated author of graphic novels, romantic women’s fiction and urban fantasy. She is one of the authors of A Flight of Angels, which made YALSA’s Great Graphic Novels for Teens Top Ten list, and the YA graphic novel Token, named a highlight of the Minx imprint by Publishers Weekly. Alisa has an MFA from Columbia University.

The author is giving away one copy of BOTH BOOKS (1 & 2) to a lucky winner on this blog! (US only)
All you need to do is leave a comment with some love for Corpse & Crown (If your e-mail is not on your Google Profile, you must leave it in the comments to enter the contest), and you'll automatically be entered into the drawing, which will take place on the night of February 23rd at midnight.
The winner will be announced on here on February 24th and notified per email.
The winner has 48 hours to respond or another winner will be chosen.