Kaps by Christina Bauer with Giveaway! 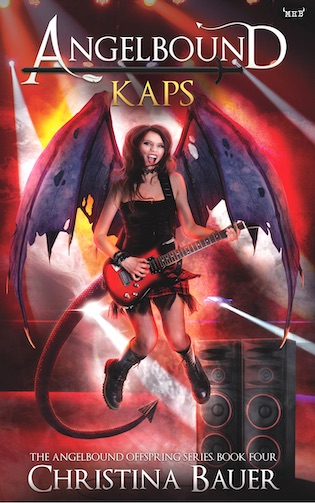 “I can NOT wait for the next installment of this series. These characters are some that you care about and want to know what goes on with in this magical world. Even the bad ones keep your attention. I’m going to go take a cold shower and see if I can calm down some.” – Flying Monkeys Reads

Meet Kaps: renegade, dragon shifter, and general pain in her parent’s backsides. Kaps turns away from the dragon world in order to become a rock star on Earth. Everything is going well—Kaps has fans, fun, and unconditional support from her best friend Rhodes—until one concert in the desert changes everything.
Kaps meets a rogue shifter named Zinnia; the encounter alters the rock star’s carefree life forever…
“From the first chapter I was hooked.” – Urban Fantasy Investigations

Plus, Don’t Miss These Series From Christina Bauer
– Fairy Tales of the Magicorum, a series of modern fairy tales with sass, action, and romance
– Beholder, where a medieval farm girl discovers necromancy and true love
– Dimension Drift, a dystopian adventure with science, snark, and hot aliens
– Angelbound, about a quasi (part human and part demon) girl who loves to kick butt in Purgatory’s Arena as outlined below…


Angelbound Origins
In which Myla Lewis kicks ass and takes names. Nuff said.
.5 Duty Bound – a prequel from Prince Lincoln
1.5 Lincoln – the events of Angelbound as told by Prince Lincoln
Angelbound Offspring
The next generation takes on Heaven, Hell, and everything in between
Angelbound Worlds
Inside stories about your fav characters Christina Bauer thinks that fantasy books are like bacon: they just make life better. All of which is why she writes romance novels that feature demons, dragons, wizards, witches, elves, elementals, and a bunch of random stuff that she brainstorms while riding the Boston T. Oh, and she includes lots of humor and kick-ass chicks, too.
Christina graduated from Syracuse University’s Newhouse School with BA’s in English along with Television, Radio, and Film Production. She lives in Newton, MA with her husband, son, and semi-insane golden retriever, Ruby.
Be the first to know about new releases from Christina by signing up for her newsletter: http://tinyurl.com/CBupdates