The Outcasts by Misty Hayes with Giveaway 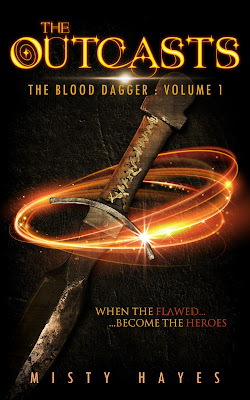 Mystical relics. Powerful vampires. Strange allies. It's hell being a teenager.Larna Collins has never understood why her dad skipped out on her and her mother when she was twelve years old. Until then, he was a devoted and loving father.But six years later, during a renovation of her childhood home, she unearths her father's journal from under a dusty floorboard. According to his final entry before he left, he had recently visited a small parish in England.The entries draw her to this seemingly quaint village, which Larna discovers isn't as charming as its blood-craving inhabitants want her to believe, and she learns that she isn't the only one trying to track her father down. Could this explain her father's disappearance? Or was placing her in the center of danger her dad's master plan all along?

City of Bones meets Vampire Diaries
Recipe for a good book:
Add a pinch of paranormal and smidge of nerd.
Mix well with powerful vampires, strange allies and an ancient relic.

Misty Hayes has always called Texas home but has a passion for world travel. Before taking up writing, she has had a long career in law enforcement. Besides the self-torture of writing books, she also loves the self-torture of running. Misty is currently working on book three of her young adult trilogy in 'The Blood Dagger' series.When not writing, Misty enjoys reading any books by Jim Butcher, Stephen King, Dean Koontz, Joe Hill, and J.K. Rowling. A lot of author's write about pets on their bio's... Misty has a grumpy old rescue parakeet named Peeta (as in The Hunger Games).

a Rafflecopter giveaway
on February 01, 2018

Email ThisBlogThis!Share to TwitterShare to FacebookShare to Pinterest
Labels: Giveaway, Misty Hayes, The Blood Dagger, The Outcasts, YA Paranormal