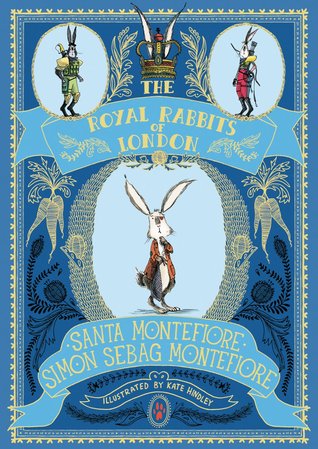 Life is an adventure. Anything in the world is possible – by will and by luck, with a moist carrot, a wet nose and a slice of mad courage!
Shylo has always been the runt of the litter, the weakest and quietest of all of his family, his siblings spend their days making fun of him for not being like the rest of them. But when Shylo stumbles across a band of ratzis and overhears their evil plan to take a photo of the Queen in her nightie, it's up to this unlikely hero to travel to London and inform the Royal Rabbits of London about the diabolical plot! The Royal Rabbits of London have a proud history of protecting the royal family and now the secret society need to leap into action to stop the ratzis... But can a rabbit as feeble and shy as Shylo convince them that Queen is in danger?
The Hobbit meets Fantastic Mr Fox meets Watership Down in this charming novel from bestselling authors Santa and Sebag Montefiore, which proves even the smallest rabbit can be the biggest hero.

Size doesn't determine worth in this hopping adventure, which packs tension in a fun and exciting tale.

Shylo is the runt of his family—something his siblings refuse to let him forget. But none of them know of his secret, forbidden friendship with an old rabbit on the edge of the forest. When Shylo overhears rats plotting against the Queen of England, he informs the old rabbit, who sends little Shylo on the adventure of his life.

This is a tale with a bit of a quirky mixture. There's a more serious, traditional feel with the burrow life, where Shylo is constantly being picked on; there's a touch of modern day as rats run around with tablets and cameras; there's poking humor as the dangerous rats, aka Ratzis, want to publish pictures in the tabloids; and there's the palace in London with it's royal life and dangers. Parts of this hang on modern whimsical, while others have a more traditional atmosphere like Watership Down. It's odd, lifts eyebrows at times. . .and it works. Splendidly.

Shylo is the perfect, tiny hero. He's shunned by his siblings but still has the never-dying love of his mother. He's brave and kind, which is clear from the first pages. It's easy to like him and root for him until the very end. And he does get into some pretty sticky situations, which are sure to leave readers on the edge of their seats. Still, the authors manage to keep even the most tense moments very age appropriate with a slight sense of humor wiggled in.  The ending wraps everything into a nice, inspiring package yet leaves the door open to many more adventures to come.

As an extra bonus, there are ample illustrations sprinkled between the pages. These slide right along with the fitting scenes and help bring the very colorful characters to life. Not only these illustrations, but the text itself keeps a lightness to the story which is perfect for even more reluctant readers. To top it off, the book holds a more elegant, high-quality feel. It's compact, shines with golden trim, opens to display bindings worthy of the Queen, and ends with a sweet, entertaining recap of the characters.

This is a tale I can highly recommend and will be grabbing up the next books in the series myself.

Santa Montefiore's books have been translated into twenty languages and have sold more than four million copies in England and Europe. She is married to writer Simon Sebag Montefiore. They live with their two children, Lily and Sasha, in London. Visit her at SantaMontefiore.co.uk.

Simon Sebag Montefiore's bestselling and prize-winning books are now published in over foty-five languages. His new book The Romanovs: 1613-1918 has been universally acclaimed and is already a bestseller in the UK, Australia, and the USA where it was on the New York Times bestseller list for eight weeks. Montefiore has won literary prizes for both fiction and nonfiction. His latest novel, One Night in Winter won the Best Political Novel of the Year Prize and was long-listed for the Orwell Prize. He is now writing the third novel iin his trilogy. Follow Simon on Twitter at @SimonMontefiore. For more information visit SimonSebagMontefiore.com