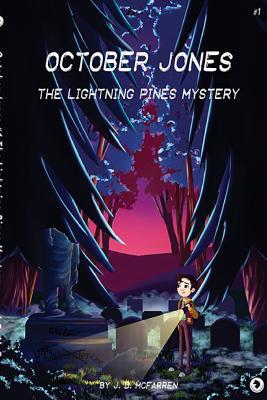 
October Jones is an adventurous, street-smart, and scrappy boy whose curiosity often leads to trouble, but ends up being his saving grace. When a series of crimes occur in Lightning Pines Cemetery, October thinks he knows who is behind it all, but his mission to solve the mystery is hindered by a meddling teacher, class bullies, false leads, and getting grounded. His impulsive nature and penchant for mischief leads his own father to believe that October might be the prime suspect. With the help from his pragmatic sister. April and his two best friends (Joey Franklin and Randy Cho), October works to solve the mystery of Lightning Pines and to clear his name.

Packed with curiosity and a good dash of trouble, this sleuth is sure to get to the bottom of things. . .even if he winds up with house arrest and detention on the way.

With already the second letter from his teacher in hand, October Jones knows he's in trouble.but luckily, his father is too busy to immediately take notice. The cemetery has been vandalized. While his father waits for the police to gather their evidence, October takes things into his own hands because he has an idea who the criminal might be. But nothing is as clear-cut as October had hoped, and he ends up getting himself put into the suspect spotlight instead. He has to clear his name, but it will take all kinds of rule breaking, wiggling, and luck to do it, especially since he's no longer sure who the real criminal is.

October Jones is not the average sleuth, although he is smart in his own way and wears curiosity like a second skin. High intellect, special investigation skills and technology, however, have nothing to do with him. This mystery is solved with common sense, tons of wrong deductions and the ability to squirm around rules and troubles with finesse. October Jones is a character especially boys will easily relate to and see some of themselves in his antics along the way.

Despite October Jones's sharp corners, he's a nice kid who really tries to do the right thing. And he has a great ring of friends to prove it. Even his older sister, who can be a pain at times, has a nice relationship with him as does the father, although he has no choice but to punish October at times. The interactions are natural, supportive and caring even when everyone doesn't always agree.

As to pacing, this story isn't easy to set down. Something is always happening, and it's never simple to guess what surprises will pop up next. October's deductions are logical and sound, but that doesn't mean they're always right. It's this uncertainty which keeps the reader guessing until the end. To the joy of reluctant readers, the end doesn't take forever to reach. The story is quick, short and holds action the entire way through, keeping even readers with lower attention spans glued to the pages. After all, October Jones is probably not a long novel reader himself.

Summed up, this is a great beginning to a fun series. The mystery is very age appropriate and comes across as natural as the adventures of the kids next door. . .just much more exciting. 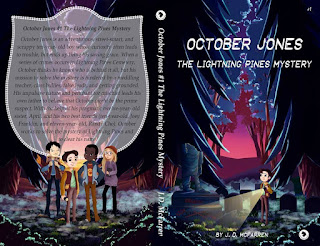 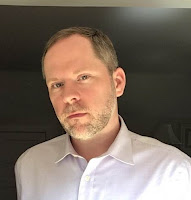 My name is J.D. McFarren. I'm a writer and candle maker living in the Hudson River Valley of upstate New York, in the foothills of the Adirondack Mountains. I have a masters in Cultural Development and work at a private college.
I write both fiction and nonfiction for children and adults with publications in Voices: The Journal of New York Folklore, Helen: A Literary Magazine, and Warm Brothers Magazine. I am the author of October Jones:
The Lightning Pines Mystery, which is the first in a planned series of books for kids.
Ten-year-old October Jones popped into my head and wouldn't leave me alone
for a few months before his story came to me one day while I was walking my
dogs through a local cemetery. October and his friends are fun to write about,
and a lot of the places in the book are based on where I grew up. I miss being
a kid, but writing about October lets me relive my childhood with all of its
mystery, excitement, and wonder.