Review: The Girl Without Magic by Megan O'Russell 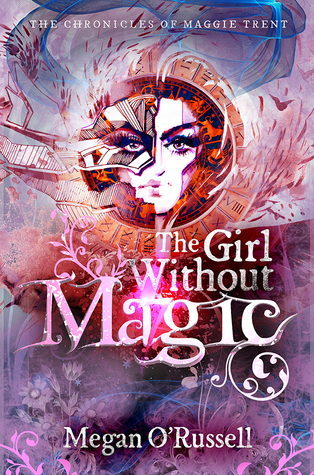 THE GIRL WITHOUT MAGIC
The Chronicles of Maggie Trent, #1
by Megan O'Russell
Curiosity Quills Press
YA Fantasy


Death would have been easier, but the Siren wasn't through with her.
Seventeen-year-old Maggie Trent fell out of a battle and into the Siren's Realm, a land where secrets hide in the shadows and pleasure comes at a price Maggie is unwilling to pay.
The time for the Siren's reckoning has come, sweeping away all she deems unworthy to live in her realm. Those without magic are hunted by the Siren. Those with magic are hunted by the Stricken. Fighting or hiding seem necessary to survive. But there is a different way.
Bertrand Wayland, unaging and unrelenting in his determination for Maggie to accept her fate, slips in and out through the stitches that bind the Siren’s Realm to other worlds, gaining magic and having glorious adventures. When Maggie follows Bertrand out of the Siren’s Realm, seeking an adventure of her own, she finds instead a world of magic on the eve of war. To save innocent lives Maggie risks her heart, her life, and her only chance of returning to the Siren’s Realm.

With magic, action, discovering new worlds and tons of adventure, this is an exciting tale which promises to become the first step in a great series.
Maggie is dead. Or so she thinks. Killed in battle, she's not surprised to find herself in the world of the dead, but she quickly learns she hasn't landed in the Underworld at all. Rather, she's been yanked away into the mythical Siren's realm. Magic is the currency, and Maggie is smart enough to want to hold onto hers. Hiding it, she works to survive like a non-magic person, using her hands and strength to trade for needed goods. Except one person seems to have caught on to her secret. Little does she realize that this man is about to open up more adventure to her than she ever dreamed possible.
In some ways, this reminded me of Doctor Who, except from the stand point of the Doctor's assistant. Maggie's unexpectedly pulled into a world, where an unseen, very powerful Siren dictates existence. The reader discovers the rules of this world along with Maggie, a place where a mere wish becomes reality, a paradise for most. But Maggie is a practical person, who knows not to trust anyone or anything at face value. She has a big heart, and a very good moral compass. Her determination and down-to-earth decisions make her a heroine to cheer for the whole way through.
The Doctor (in my comparison) is a strong magic wielder who has been in the Siren's realm for quite awhile, Bertrand. He's a mysterious man, older (so no romantic interests per say), holds a polite air, and comes across as wise...but maybe not always as right as he appears to be. The relationship between Maggie and him isn't simple, but he's the one who opens up the wonders of traveling between worlds and is her 'guide'. His aloft attitude and constant words of wisdom add a wonderful contrast to Maggie's character to form a duo worth a series.
The plot itself is refreshing and full of surprises. The author takes time for Maggie to find her place in the Siren's realm, letting this complex world develop fully before taking Maggie onto the main adventure. Maggie's character is fully unfolded, letting the reader get to know her well while keeping a high level of mystery, adventure and tension. Then, the next world takes hold and the next adventure kicks in, which offers another developed world, more interesting characters, and, for Maggie, even a possible, romantic relationship.
It's refreshing to enter a series, where there isn't one main plot line, but rather changing ones as Maggie encounters new adventures. The characters change as well, but that doesn't mean that they come across shallow. Rather, they gained their own depth and uniqueness. Each one has their own relationship with Maggie and leaves an impact on her (and the reader). It's constant development with the promise of much more to come. And all of this is wrapped up with constant discovery, tense moments of action, unexpected surprises, and constant high-stakes with life on the line. I can't wait to see where Maggie and Bertrand go next.
on February 03, 2018

Email ThisBlogThis!Share to TwitterShare to FacebookShare to Pinterest
Labels: Megan O'Russell, The Chronicles of Maggie Trent, The Girl Without Magic, YA Fantasy