Review: A Couch for Llama by Leah Gilbert 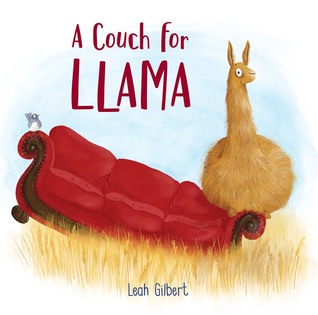 
When a family finds a surprising new home for an old couch, a llama becomes the happiest creature of all.

The Lago family really loves their couch. It’s perfect for reading, snuggling, playing, and jumping. But all good things must come to an end, and, one day, the family realizes the time has come to replace it. As they drive home with their brand-new bright-red couch, though, it gets knocked off the top of their car into a field . . . where a llama tries to make sense of this new thing. At first confused—It doesn’t talk! It doesn’t taste good! It doesn’t budge!—the llama soon realizes how comfy the couch is and settles right in. Can the family get its furniture back—and keep llama happy, too? Leah Gilbert has written and illustrated a warm picture book that touches both the heart and the funny bone.

A llama's greatest wish is granted. . .one he didn't even know he had.

An active, full-of-life family is in dire need of a new couch. Off they go to the store, but while transporting the new piece of furniture back home, something goes terribly wrong. This sudden moment of bad luck is llama's fortune. He faces a couch in his pasture. . .now, if he can only figure out what it is and why it isn't as tasty as he'd hoped.

This is one to make llama fans' hearts beat faster. The llama is one curious creature, and really doesn't know how to handle that couch. His attempts at figuring it out are hilarious and take a very understandable progression. . .for a llama, that is. But even the Lago family has a wonderful part in all of this. They're easy to relate to and full of life and love. Young listeners and readers will find their first couch adventures funny too. Mom's might even cringe a couple of times.

The illustrations are just right and let the humor flow. The llama's and Lago's expressions in these pictures are priceless at moments. It's entertaining to flip through and gaze at these time and again.

This one gets a huge thumbs up from me and my kids.

Leah Gilbert is a greeting card designer from Denver, CO. This is her debut book. You can see more of  Lea's work at leah-gilbert.com, and follow her on Twitter at @Lalaleeeah. Leah is available for interview.
on February 12, 2018