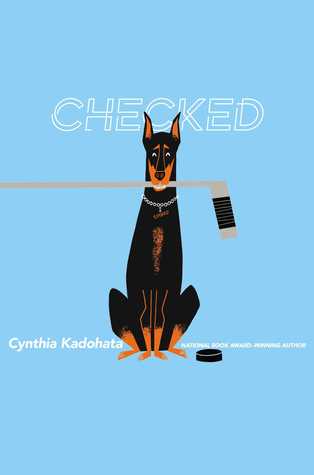 From Newbery Medalist Cynthia Kadohata comes a brilliantly realized sports novel about a hockey player who must discover who he is without the sport that defines him.Hockey is Conor’s life. His whole life. He’ll say it himself, he’s a hockey beast. It’s his dad’s whole life too—and Conor is sure that’s why his stepmom, Jenny, left. There are very few things Conor and his dad love more than the game, and one of those things is their Doberman, Sinbad. When Sinbad is diagnosed with cancer, Conor chooses to put his hockey lessons and practices on hold so they can pay for Sinbad’s chemotherapy.But without hockey to distract him, Conor begins to notice more. Like his dad’s crying bouts, and his friend’s difficult family life. And then Conor notices one more thing: Without hockey, the one thing that makes him feel special, is he really special at all?

Hockey stands center stage, to the side, and in the background in this novel, while hitting on some harder topics which play at the heart-strings.

Eleven-year-old Conor sleeps, eats and breathes hockey, and so does his father. Conor's pretty sure that's why his step-mother left them, but life without her isn't too bad considering hockey takes up everything. Then there's Sinbad, their pet Doberman, who stands at Conor's side through thick and thin. When Sinbad is diagnosed with cancer, life gets turned upside-down. Conor tries to figure out ways to help pay for Sinbad's needed surgery and finds himself seeing the bigger world outside of hockey. What he sees changes him forever.

I was thrilled to get my hands on a hockey novel for middle graders, and the author does a fantastic job at bringing Conor to life. He's a typical, sports orientated boy stuck in a very realistic family situation. His initial ability to only see hockey is understandable, especially with his father cheering along at his side. When tragedy strikes, it's not hard to feel for Conor. His reactions come across natural, and his desire to dig in and help make him easy to like. Even his solutions fit well.

The father fills a wonderful role. He has his issues—ones that leave him broken and fighting for air—but he does his best to hide them. His love for Conor and desire to push him along while piling everything into hockey dreams, captures a real side of many parents.

As for pacing, there's always something going on. Conor has a lot on his plate (especially in the 2nd half of the book), and this pace shows through the book as well. This is a book about a boy who loves hockey, and that shows. Practices and games are not rare. The author either has her own experience in the area or has done her research well, as these scenes are brought forward with all necessary details and emotions. The areas outside of hockey also pack a punch, pulling at the heart-strings. Conor struggles, does his best to handle situations and grows along the way. The reader feels this.

This is an emotion packed novel with tons of hard hockey and personal development along the way. Hockey players (and fans) will easily connect to Connor and sink into his life. However, the 400 page mark is simply too long. While hockey players are sure to love much of this, most won't have the attention span to get through it. Which is too bad. Those who are avid readers may not sink into these sport scenes with as much comfort and excitement as they could, although they will enjoy the other challenges and depth the book otherwise has to offer. For the right reader, this is well worth the read.
on February 06, 2018