Sneak Peek: My Not So Normal Life: Spy Recruit by Liz Laz 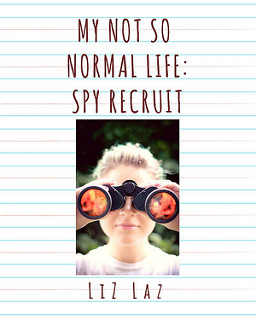 
My name is Lily Anne Gemorski. I am not your normal eleven-year-old. I am a spy. I speak four languages and know how to defend against someone three times my size. As a new recruit, I have learned a lot about being a spy. What I haven't learned is how to lie to my best friend, Becky; or how to get my team captain to stop hating me.

The older woman with the khaki hat unfurled a banner which read: “Camp Martinsen: Summer Training Camp for Spies.” My suspicions increased.
A murmur erupted from the group of campers.
“I guess the spy thing is a theme,” said Chelsea.
“Uh-huh,” I nodded. I looked around the camp.
“They take it pretty seriously,” said Chelsea.
“Yeah,” I said, the feeling in my stomach not getting any better.
Before, I had thought the spy letter was a gimmick. A theme of the camp, used to lure in more campers. But standing at the actual camp and looking at the counselors, I no longer thought it was a gimmick. It seemed to be legitimate. Realization hit me. I was at a summer camp meant to teach me how to spy.
“I don’t think it’s just for show,” I said to Chelsea out of the side of my mouth.
Before Chelsea could reply, the older woman stepped up to the podium.
“Attention ladies and gentlemen,” she said. “Welcome to Camp Martinsen! I’m Ms. Amelia Martinsen, Teen Operations Unit Director. You are the tenth group of recruits for the Teen Operatives Unit, though most refer to it as T.O.”
A million different thoughts began running through my head. I wondered how this had happened. I figured it must be a mistake. I was boring, normal, and nothing special. They must have sent me the letter as a joke. I was not the “spy kind.” Then again, what was I even thinking? What is the “spy kind” anyway? I was a kid. I couldn’t be a spy. I looked around at the other campers. Realization of the true nature of the camp had registered on their faces. We all shared the same perplexed and confused looks with each other. I think we were looking for someone to answer our questions.
“I realize you must have at least a dozen questions, which we will answer in good time. But first, I would like to give out your cabin assignments. Those with a last name between A and K please report to the Silmens, those between L and R to Felix and Rusco, and those between S and Z to Mitchell and Valeriori.”
I looked past the podium to see three tables. Chelsea walked up to the one-labeled “L-R”, while I quickly walked up to the table labeled “A-K”. The table had a male and a female counselor standing behind it. Both looked to be in their mid-twenties.
“Man, I wish she would stop using that name,” said the woman with a light chuckle to the man. She rolled her bright green eyes, her long auburn hair gently blowing in the wind.
“I thought you liked the name Silmen,” the man teased, as he handed a folder to a tall boy in front of me.
The woman scrunched up her face.
“I did, I mean, I do, but that was before everyone started using it with me. I guess I’m just used to being called ‘Jones,’” She said before turning her attention to me.
“Name?” she asked.
“Gemorski,” I said hesitantly.  “That’s, G-E-M-O-”
The woman waved her hand. “Don’t worry. I know who you are.” She smiled, flipping through the folders.
“Now here’s a name you wouldn’t want to be stuck with,” the male counselor said, pulling out another folder and showing it to the woman. “This kid’s name is Buttlick. Makes the name ‘Silmen’ sound a lot better, doesn’t it?”
The man looked at me, suddenly realizing I had been standing close enough to hear their conversation.
“Your last name isn’t Buttlick is it?” the man stammered. “Because if it is, I didn’t mean… it’s a great name.”
“That’s not her name,” the woman assured the man, gently touching his arm. “And it’s not Buttlick, it’s pronounced “Buelike.” The “t” is silent. You were always bad with pronunciations.”
The woman turned and handed me a packet with my name and cabin number printed on it.
“Don’t pay attention to him,” said the woman with an embarrassed shake of her head. “My husband is just joking around. He still thinks he’s one of you kids.”
“Uh-huh,” is all I managed to get out of my mouth. I took the packet and turned away from the table.
I began to walk away, when I overheard the two counselors talking about me.
“Gemortski?” Mr. Silmen asked his wife.
“No, Ge-mor-ski,” she corrected him, saying my name slowly. “Honestly, you are awful at pronouncing names. Remember my case report? I told you about her.”

Liz Laz began writing as a child and penned her first novel, My Not So Normal Life: Spy Recruit at the age of 15. Liz continued writing in her spare time while attending college at Dominican University and law school at the John Marshall Law School. Liz works as an insurance attorney and writes in her spare time. Liz loves binge watching Parks and Recreation and 30 Rock on Netflix, traveling, and spending time with her family and friends. Liz lives with her rescue dog, Robin Hood, just outside of Chicago.


This blog tour is organized by Lola's Blog Tours and the blog tour runs from 29 May till 18 June. See the tour schedule here