Review: Holly Farb and the Princess of the Galaxy by Gareth Wronski 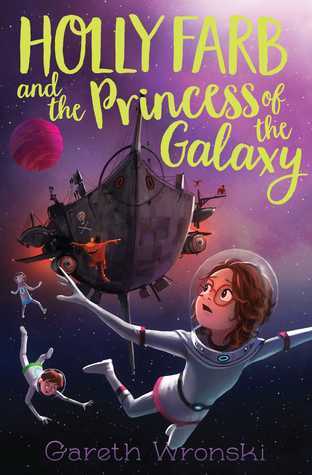 
Holly Farb is not the Princess of the Galaxy. She may be top of the class in every subject, but she can’t even win a school election, never mind rule the Milky Way. The aliens who kidnapped her have gotten it all wrong.

Unfortunately Holly’s alien pirate kidnappers believe that she’s the princess they’ve been looking for, and so she finds herself hurtling through space on an alien pirate ship together with her teacher, Mr. Mendez, and Chester, the most annoying boy in her class. Now all she has to do is escape the pirates, find the missing princess, and get back to Earth in time for her big test on Friday.

But it turns out that space is a pretty big place, and before they can go home, Holly, Chester, and Mr. Mendez must face down space cruise liners, bounty hunters, giant worms, perky holograms, cosmic board games, sinister insectoid librarians, and a robot who is learning how to lie.

Between running from space pirates, defying the President of the Universe, and meeting a host of rather unusual new friends, Holly starts to wonder if there might be more to life than being top of the class after all.

Tests and school are swept far, far away in this exciting adventure, where flubby pirate aliens, nut nibbling presidents and robots with a more than mighty vengeance come up against the most uninteresting creature in the entire universe--a human girl named Holly Farb.

Holly's life centers around one goal; being the best at school so as to gain acceptance into the highly exclusive Falstaff Academy. When a new boy enters her class, who seems to know the answer to all questions, it's almost more than Holly can stand. When three strange men show up and ask if she's an important person, her only answer is 'yes'. But that's the wrong answer. Kidnapped by space pirates, who believe her to be the Princess of the Galaxy, she suddenly discovers that aliens do exist, and she's about to become alien mince-meat.

This book is fantastic! Adventure, action and tons of quirky fun roll off of every page with a similar whimsical style as The Hitchhiker's Guide to the Galaxy. Holly is an average, know-it-all middle school girl, who kind of wishes she had a couple more friends. During her journey through space, she discovers the answer to all of her questions, and not exactly in the most expected or desirable ways.

There is never a boring moment as Holly not only meets all sorts of creatures, but finds herself in the middle of a slimey, alien nest of intrigue. Luckily, she's has two friends from her school at her side, who aren't what they seem but at least, as true as alien blue.

Summed up, this is a must read this Summer, and is sure to leave tons of smiles on young readers' faces. Even the larger of us useless Earth creatures are sure to enjoy a dive into Holly's universe and wish we'd run into some space pirates of our own.

Gareth Wronski was born and raised in Toronto. After watching Star Wars as a child on his grandparents’ VCR, he decided he wanted to tell science fiction and fantasy stories of his own. He currently resides in an old house by the Avon River in Stratford, Ontario, where he lives in constant terror of roaming swans.

Email ThisBlogThis!Share to TwitterShare to FacebookShare to Pinterest
Labels: Gareth Wronski, Holly Farb and the Princess of the Galaxy, Middle Grade Science Fiction