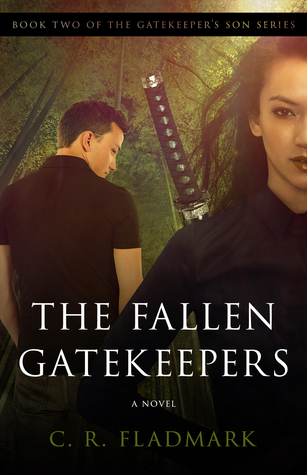 It’s been months since sixteen-year-old Junya survived his savage battle with the Evil Ones, but now that he’s back in San Francisco he's still feeling the effects. His limp is slow to heal, his shoulder aches from the bite that should have killed him, and black poison lingers in his blood, tainting his life energy.

The Gatekeepers of Izumo Oyashiro, land of the gods, fear he’s been permanently affected and are reluctant to allow him to return to their realm. His own mother, once a Gatekeeper herself, seems guarded and suspicious around him.

The only one not keeping Junya at arm’s length these days is Shoko – the deadly warrior who dresses like a Japanese schoolgirl – and despite his worries, Junya can’t help thinking of ways to introduce this ancient guardian of the gods to modern romance.

But when someone in Junya’s world begins brutally slaughtering the shamans of the Earth’s ancient religions, Junya and Shoko realize the Evil Ones are back, apparently stronger than ever. And without the shamans’ worship, the gods grow weak and the gateways between worlds are left unattended. Soon the entire realm of Izumo and the very existence of the Gatekeepers are in jeopardy.

Junya and Shoko devise a bold plan to save Izumo, but it means changing the rules that have governed Gatekeepers for centuries. Even if they succeed, nothing will ever be the same.

Will it be worth the cost?


I was excited to get my hands on this book after reading the first one in the series. I would strongly suggest that readers start with the first book, since the second book builds on the events and characters of the first without taking the time to re-explain things. In other words, this is not a stand alone.

Again, the author builds a rich world full of interesting characters and lots of action. Although the main focus is on Junya and Shoko, the other members of Junya's group and several other side characters are not shoved off. This gives a nice rounded story with several layers, which make it a joy to read.

The world building is even better in this book than in the first. Small confusions are avoided as the world and layers of mystery and information flow smoothly and form an intricate world. There's action and magic and a wonderful amount of adventure, but this doesn't over power the emotional end. The thoughts and feelings of the characters come across clearly, add depth, and make this feel more like a young adult read than the first book did.

A variety of cultures and countries are whisked through in these pages, and, unfortunately, this could have been better done. The visits to each country are quick and give little insight on real life or true cultural aspects, but rather stick to stereotypes.  This superficial sweep over also seeps into several character attitudes, especially in the way females are handled.

All in all, this is a solid fantasy read for teens and holds all the adventure, magic and tension to keep the reader hooked until the very last page.
on June 23, 2017