Review: A Buss From Lafayette by Dorothea Jensen with Giveaway 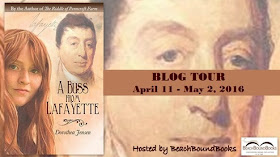 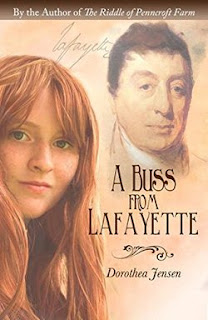 A Buss From Lafayette

Fourteen-year-old Clara Hargraves lives on a farm in Hopkinton, a small New Hampshire town, during the early 19th century. She has a couple of big problems. First of all, she has a stepmother, Priscilla, who used to be her spinster schoolteacher aunt. Clara resents that her late mother’s older sister has not only married her father but is about to have a baby. To make matters worse, “Prissy Priscilla” keeps trying to make the rambunctious, clever, and witty Clara act like a proper young lady. Secondly, Clara has red hair, making her a target for teasing by a handsome older boy, Dickon Weeks, and by her pretty seventeen-year-old Dread Cousin Hetty. Clara, however, has a secret plan she hopes will change this. During the last week of June, 1825, Clara’s town is abuzz because the famous General Lafayette is about to visit their state during his farewell tour of America. In those eventful seven days, Clara learns a lot about her family, Hetty, Dickon, herself, and about Lafayette. She comes to understand the huge and vital role the young French aristocrat played in America’s Revolutionary War and to see that her problems might not be quite so terrible after all.

This lovely jaunt into the year 1825 has nothing to do with dusty history books, but rather, brings to life the less known history of General Lafayette through the eyes of a spunky girl.

Clara is a 13/14 year old girl, who's still coming to terms with the death of her mother, quick marriage of her father to her aunt and the fast approaching birth of her half-sister. Add her strong dislike for her red hair, a pesky brother and the horrid idea that she should give up the most fun aspects of life and become more 'lady-like', and her world seems miserable. Her clever wit and slightly rebellious attitude make her easy to love, especially since her thoughts and feelings are often justified and understandable. Teenage girls will have no problem relating to her troubles, and through Clara, they can realize that girls from that time frame weren't necessarily so different from girls today.

The author does a marvelous job bringing the past to life. There's just enough details and explanations to make the lifestyle, habits and expectations from that time clear while keeping everything familiar enough that readers can relate to the characters. More unknown terms and items are explained in a way which doesn't break the flow of the story. At the end of the book, there's glossary to help out too.

General Lafayette's role in American history is expertly woven into Clara's life. The important events are relayed through her conversations with various characters in different situations. A little humor and tidbits from the time period are thrown in at the same time, helping to keep the 'tales' broken up and refreshing. There were a few moments where one or two recounts of Lafayette's important moments stretched out a little long, but in general, they were interesting.

Although this isn't an action book, the pace holds nicely. Clara finds herself in one predicament after the other as she tries to come to terms with those around her. There's a little romance involved and some tough rivalries in the area of friendship--those same things which teenagers face today.

Summed up, this is a marvelous historical fiction story. The characters are kept true to their time frame while, at the same time, are portrayed in a way modern day teens will have no trouble relating to. The 'history lesson' glides effortlessly into the main plot, insuring an educational delight. This is one YA historical fiction, I can highly recommend.

Dorothea Jensen, born in Boston, Massachusetts, grew up in Chillicothe, Illinois. She majored in English literature at Carleton College. After teaching high-school English and serving as a Peace Corps volunteer in Brazil, she earned a master s degree in education at the University of New Mexico. In 1989, Harcourt Brace Jovanovich published Dorothea s novel for young readers about the American Revolution, The Riddle of Penncroft Farm. In addition to other honors, it was named an International Reading Association Teacher s Choices Selection and is read in classrooms throughout the U.S. A Buss from Lafayette is set in the small New Hampshire town where Dorothea lives. Two things inspired her to write this story. First, was learning that Lafayette passed right by her house during his 1824-5 Triumphal Tour. Another was meeting a woman whose ancestor received a kiss from Lafayette. That buss, passed down through generations, eventually came to Dorothea. This sparked her interest in Lafayette s contributions to our struggle for independence. Dorothea also enjoys writing rhyming verse. She has written a series of award-winning illustrated modern Christmas stories in verse featuring Santa's Izzy Elves.

For more information about Dorothea and her books, please visit http://www.dorotheajensen.com/.

Prize: One winner will receive a $25 Amazon gift card or $25 PayPal cash prize, winner's choice Giveaway ends: May 2, 11:59 pm, 2016 Open to: Internationally How to enter: Please enter using the Rafflecopter widget below.Terms and Conditions: NO PURCHASE NECESSARY TO ENTER OR WIN. VOID WHERE PROHIBITED BY LAW. A winner will be randomly drawn through the Rafflecopter widget and will be contacted by email within 48 hours after the giveaway ends. The winner will then have 72 hours to respond. If the winner does not respond within 72 hours, a new draw will take place for a new winner. Odds of winning will vary depending on the number of eligible entries received. This contest is in no way sponsored, endorsed or administered by, or associated with Facebook. This giveaway is sponsored by the author, Dorothea Jensen and is hosted and managed by Stacie from BeachBoundBooks. If you have any additional questions – feel free to send and email to stacie@BeachBoundBooks.com.