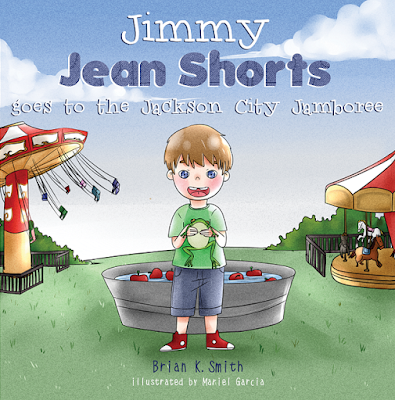 Jimmy “Jean Shorts” Jackson is a little boy who lives in a small southern town called Jackson City. When we meet him he has just been put in time out by his mother. You see while at the Jackson City Jamboree last night Jimmy and his two best friends, Billy “Blue Pants” Butterfield and Susie “Suspenders” Sinclair, ran into the biggest and meanest kid in Jackson City, Willie “White Hat” Williams. Willie challenges Jimmy by saying that he bet he could beat Jimmy at the jamboree’s apple bobbing contest. What White Hat didn’t know was that Jimmy had something up his sleeve that might help him win the contest...or was it in the pocket of his jean shorts?

This is the perfect picture book for adventurous (and sometimes a little sneaky) boys. Jimmy Jean Shorts gets his name from the jean shorts he always wears. The other characters in the book also have such fun names, each which reflects something similar about them. This makes it easy for kids to remember and adds a little fun.

Jimmy Jean Shorts is a boy which will draw the interest of other boys his age. He's not naughty - not really - but has wondrous ideas which may not always walk the 'behaved' line adults would like to see. And it gets him into hilarious trouble. He's simply a fun character.

The illustrations are nicely done. They are colorful, have enough detail to make them interesting and draw the reader in. It's easy to simply flip through the pictures without having the story and still be entertained (a must for picture books, in my opinion.)

I wouldn't recommend this to the youngest picture book audience but more for kids ages 3+. The text is a little much for younger ones at times. Also, I felt that things tended to get a wordy at moments, which could loose the interest of the youngest readers or ones that don't like to sit still. But in general, it's a really cute story which has been put together with lots of love.

Summed up, this is a fun read with spunk, which I recommend to especially boys ages 3+. However, I'd make sure parents keep an eyes on their kids' pockets afterwards. You never know what you might find.

I am a married father of two boys and am a lifelong Floridian (except for those two years when we lived in Indiana and nearly froze to death).  By day I work as a banker, but I am also an entrepreneur.  My two sons have inspired me to begin writing and Jimmy Jean Shorts is my first adventure into the children's picture book world.