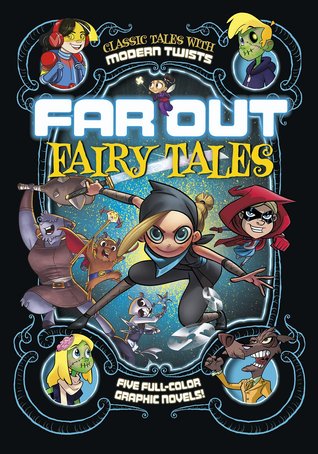 What do you get when classic fairy tales are twisted about, turned inside out, and reworked for the graphic novel format? Far Out Fairy Tales! Discover what Snow White would be like if she were raised by robots. Find out how Cinderella's story plays out when she walks the path of the ninja. Play along when three billy goats named Gruff get stuck inside a video game. Chase down the Big Bad Wolf with the help of a superpowered Red Riding Hood! Each fairy tale revision holds true to the spirit of the original while adding a modern twist to the classictales we know and love. Experience fairy tales like never before in this innovative series of full-color comic books for kids!

The individual tales are already available.
The collection is expected to be released on
APRIL 1, 2016!

As a fan of fairy tale retellings, I was thrilled to get my hands on this, and I was not disappointed. The cover and title fit perfectly to what one finds inside--all the favorite fairy tales but from a point of view that is totally unexpected and tons of fun. Written in the good ole comic book style, each 'section' takes one fairy tale and tells it from a completely new direction. Cinderella the ninja wants to meet the prince, but not for the reasons those traditional tellings suggest. And Red Riding Hood is up against a wolf unlike the world has ever seen--good thing she has some secret talents of her own. This collection is power packed with the flair of super heroes and adventure modern kids are more than accustom to. But the author doesn't want to let those traditional tales fall away and collect dust either. So to help readers maintain a thread to the original tales, there's a one page summary of the traditional tale at the end of each story. To make it even more clear which far out twists are added to the stories, there's a list of each change at the very end. Although I found the summaries of the original tales a great idea, the detailed list of 'twists' seemed unnecessary and almost too much (but that might just be me.) The illustrations in this are fantastic, exactly that what is to be expected from a graphic/comic book style. They are bright, full of energy and will keep kids hooked. The stories flow well from one scene to the next, never leaving any room for confusion. I wanted to punch and fly right along with the heroes, and cheered when victory was theirs. As to the original meaning behind fairy tales. . .well, some of the stories convey the message better than others. Adventure, action and excitement take the spotlight in these tales.Summed up, this is a exciting twist of fairy tales that kids 6+ are sure to enjoy.