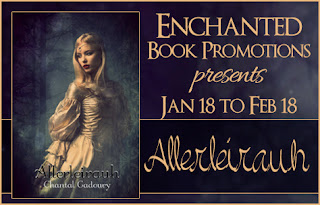 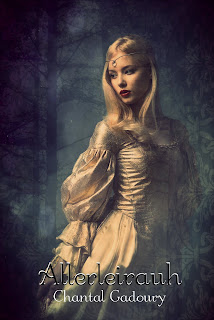 
Once Upon A Time…

A King makes a promise to his dying wife to marry only someone with her golden hair. The King finds his eyes are turned by his maturing daughter. Realizing her Father’s intentions, Princess Aurelia tries to trick her Father by requesting impossible gifts: Dresses created by the Sun, Moon and Stars and a Coat made of a Thousand furs. When she discovers his success, Aurelia decides to sacrifice her privileged life and escapes the Kingdom disguised in the cloak, and under a new name, “Allerleirauh.” Aurelia enters the Kingdom of Saarland der Licht where she is taken under the wing of the handsome Prince Klaus. Aurelia must face herself, her past and her fears in her journey of self discovery. “Allerleirauh” is a Retelling of the Grimm Brothers’ Fairy Tale classic.

Allerleirauh is a less known fairy tale, but that doesn't make it any less interesting than the rest of the Brother Grimm's stories. Honestly, it's always these not so popular ones that catch my interest the most.

This is sold as a book for Young Adults, but I must warn that there is a rape scene early on which does hit light details. So I would not recommend this for the younger YAers or anyone who is disturbed by such incidences.

That said, this was a book I read in one sitting. The beginning was a little rough for me to get into simply because it's told almost only from the lovely Aurelia's point of view. There's very little reaction with other characters during these opening pages, but then, Aurelia is a fairly isolated and lonely girl. Her history and situation pulls at the heart-strings and makes it impossible not to feel for her, especially when things simply go from bad to worse. Her reactions fit very well and it's easy to understand why she is stuck in the situation she is.

After the opening, the story picks up pace. Other characters get involved, and I found it a lot easier to fall into the pages. There were a few moments where I questioned Aurelia's actions and behavior, but in general, I could only cheer for her and hope she made it through.

The romance is super sweet, and the hero is one to drool over. He's kind, patient and exactly the kind of guy a girl like Aurelia needs. There's enough tension and misunderstanding to keep the situation on it's toes, so that I didn't wonder at times if things would really work out.

This wasn't a story which spent a lot of time on descriptions, but kept a nice paced plot. I didn't find myself skipping over paragraphs (which I sometimes do if there isn't enough action), and couldn't wait to see what happened next. There were a couple of moments where I thought things happened a bit too quickly or needed a little more explanation, but in general, everything fell into place. It reads more like an old fashioned fairy tale with a bit more 'telling', but fairy tale fans shouldn't mind this at all.

Summed up, this is a lovely read for fairy tale retelling fans and a special treat for those who don't know Allerleirauh's story yet. I wouldn't recommend it to younger YAers due to some of the content, but believe mature audiences will enjoy it. 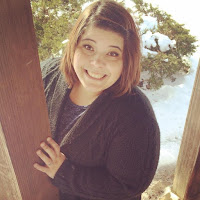 Chantal Gadoury is a young author who currently lives in Dover, Delaware with her two cats, Theo and Harper and her fiance, Robert. Originally from Muncy, PA, Chantal appreciates the beautiful mountains and enjoys visits back to see her family. She also loves anything Disney and has a reputation of beating anyone at a mean game of Disney trivia. When Chantal is not writing, she enjoys painting, watching British History Documentaries,  drinking iced-coffee and spending time with loved ones. Chantal first started writing stories at the age of seven and continues on with that love of writing today. Graduating from Susquehanna University with a Creative Writing BA, writing novels has become a dream come true.