Happy Book B-Day, Running in the Dark by Inger Iversen with Giveaway 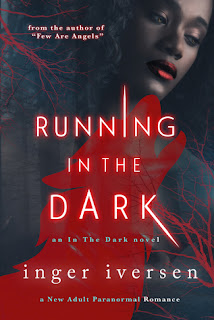 
He is known only as Trace—because he leaves no trace of his victims behind.

A deadly Russian slayer, Trace’s life has always revolved around death. Death, and preventing humankind from learning about the legendary creatures of the night. But now his position as a Watcher has become a prison, and dealing death for the Vampire Nation isn’t as prestigious as he once believed it to be.
College dropout Bessina Darrow has witnessed things she isn’t permitted to see, a simple case of wrong place at the wrong time putting her life in danger. When Bessina becomes his new mark, Trace is prepared to eliminate her—until he discovers a way out for them both.
Protecting Bessina means defying the leaders of the Nation, an act that has them both running for their lives. The more Trace fights to disappear from danger, the more he unravels the secrets crafting his world—secrets he must unveil in order to finally save a life, instead of destroy it. Okay , I can do that.

He eyed Bessina, and as he took another step forward, she inched back. “Why must you people always make this so difficult?” Cole asked with a sneer. “I mean, I can make it feel good.” He looked at her appraisingly, eyes slithering over her body, making her fill sick to her stomach. “You know it’s coming and that you can’t escape. Why not just sit back and enjoy what I can do for you?” He quietly moved closer.
She shuddered and whispered, “Some people find dying unappealing.”
Cole gave a mirthless laugh that sounded more like a growl. “No, sugar. Death is easy. It’s living that’s hard.” He raised his hand and pointed to the dark sky. “People think the ultimate escape is death, but they are too weak to live. You are one of them. Let me help you. Let me end your suffering, while you fuel mine.”
Bessina knew better than to disagree with a crazy person, especially one with so much menace in his onyx eyes. She took another step back.
“Pain, loss, disappointment . . .” His words hit her hard, but he was a fool if he thought she wanted him to release her from her life. “You’re all just waiting for the day your suffering will end.” Cole took two large steps and grabbed her arm just as she dug her feet into the ground to run.
Bessina screamed and tried to wrench her arm free.
He leaned forward, placed his lips against her neck, and inhaled. Pulling her backward, he looked into her eyes as he pushed her against the car. “I bet you taste good.”
With his free hand, he squeezed her hip. Bessina yanked away and lifted her knee to knee him in the family jewels, but he was faster. Pain blossomed in her knee as it collided with his, and she shrieked.
On a shuddering breath he spoke, “I promise, I’ll make sure you enjoy this.” Fangs extended from his lips, and black pools filled the whites of his eyes.
A scream launched from her throat as Cole placed his mouth on the hollow of her neck. Bessina thrashed and pleaded for him to release her.
A dark chuckle escaped his lips. “The harder you fight, the more I’m going to enjoy this.” 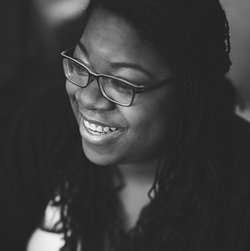 Inger Iversen was born in 1982 to Anne and Kaii Iversen. She lives in Virginia Beach with her overweight lap cat, Max and her tree hugging boyfriend Joshua. She spends 90 percent of her time in Barnes and Noble and the other ten pretending not to want to be in Barnes and Noble.

Email ThisBlogThis!Share to TwitterShare to FacebookShare to Pinterest
Labels: Giveaway, Inger Iversen, Running in the Dark, YA Paranormal